SML Good Neighbors, Inc. present: RICKY SKAGGS & KENTUCKY THUNDER
Grounds 4pm | Gates 5pm | Show 7pm
Ricky Skaggs is thrilled to be making a sixth return trip to Franklin County for a show on Saturday, August 28, with his Kentucky Thunder Band. His life's path has taken him to various musical genres, from where it all began in bluegrass music, to striking out on new musical journeys, while still leaving his musical roots intact. His passion for playing the music he loves allows him to bring his lively, distinctively American form of music out of isolation and into the ears and hearts of audiences across the country and around the world. Rescheduled from 5/23/21.
Net proceeds to benefit SML Good Neighbors, Inc. 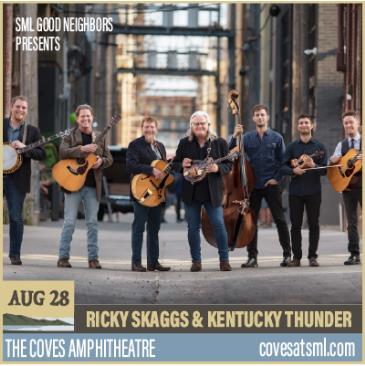