Rave of Thrones is a musical event centered on Kristian Nairn, the actor turned DJ who plays Hodor on the popular HBO television series “Game of Thrones.” Nairn is a Northern Irish actor who has appeared in other documentaries and TV series including the English mystery series “Ripper Street.” Hodor is his first major role, also an enigmatic fan favorite character who only repeats one line, “Hodor.” Nairn has been traveling around the world performing deep house music including remixes of music from the show.

Rave of Thrones has been brought to venues including B.B. King’s in New York. Attendees are encouraged to come in Game of Thrones themed costumes. 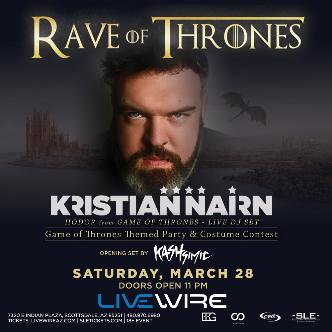