Shauna McKenzie, aka Etana, dropped her fourth studio album, I Rise on Oct. 28th, 2014 which later hit No. 1 on the US Reggae Billboard charts. Etana was born in Jamaica and moved to South Florida in the early 90s. After college, she joined an all-female vocal group called Gift. She chose not to conform to the music industry’s skimpy standards and moved back home to Kingston, to focus on producing music based on her Rastafarian spirituality and love of Jamaica. Back home she performed background vocals for Richie Spice and Fifth Element and she wrote her first single “Wrong Address” while in studio with some of the band’s musicians. This single reached #1 on several Jamaican charts and was included in her first album The Strong One in 2008.

Rylee Anuheake’alaokalokelani Jenkins, aka Anuhea, is a self-taught guitarist and song-writer born on the Hawaiian island of Maui. Anuhea blends Pop, Reggae and R&B with engaging conscious lyrics to create a style truly her own. Her debut album Anuhea released in April of 2009. It shot to #7 on the iTunes Pop Charts, #4 on R&B, and #3 on the World/Reggae Billboard Charts and multiple singles became commercial successes on Hawaii and AAA national radio. Anuhea began showcasing her talents while boarding at Hawaii’s famous Kamehameha Schools in Honolulu. She’s released 2 studio albums, 2 live albums and has worked with, contributing guest vocals for the likes of SOJA, J Boog, Tarrus Riley, The Green and more. 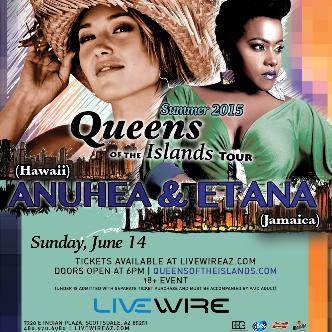