Fusing psychedelic pop and the deep grooves of dance music, Brooklyn experimental pop outfit Psymon Spine’s music is oozing with approachable melodic hugeness on first contact—but the places these guys take their songs is truly out there, exploring complicated feelings and catharsis through a singular approach to left-of-center electronic and dance sounds.

Psymon Spine's origins date back to core members Noah Prebish and Peter Spears meeting in college and finding common ground in their artistic aims: "We wanted to make something that was experimental, but also accessible and satisfying," Prebish states while discussing the thrust of the band's origins, citing influences like Talking Heads and Os Mutantes along with the rush of the NYC dance scene. Eventually, keyboardist/producer Brother Michael joined Psymon Spine, as the trio hashed out the demos for what would become their debut, 2017's You Are Coming to My Birthday. Prebish's work in buzz-making dream-pop band Barrie led him to meet singer and multi-instrumentalist Sabine Holler, who eventually joined Psymon Spine's ranks after they both parted ways with the rest of Barrie.

Embracing and exploring left-field electronic sounds ranging from disco's high-energy rhythmic breakdowns to the upward build of early techno and motorik's indelibly incessant pulse. Psymon Spine put their own loopy and addictive stamp on the sounds of the past throughout, with surprises at every turn and the type of lush synth work that could only come from such brilliant students of dance music.

Hypoluxo almost didn’t make it. Members of the Brooklyn-based quartet have been playing together in some form since their teens but their experience with the music industry could have broken a less tenacious group. Young and impressionable they signed an opaque deal that left them at the whim of a label with no interest in transparency or care for their releases. Many bands have broken up, fallen apart and moved on from lesser struggles but the frustration born from this experience crystallized into an aggressive and urgent album of power-pop inflected post-punk on Hypoluxo’s LP3.

On LP3 the band have crafted their most polished, unmediated and rousing songs to date. Eschewing the dream pop of their previous work LP3 hits immediately with lead guitarist Cameron Riordan’s angular post-punk lines whirling over the unrelenting rhythm section of drummer Marco Ocampo and bassist Eric Jaso while lead singer Samuel Cogen’s emotion packed vocals, replete with distinct yelps and near-screams grab you by the collar and refuse to let go. With help from San Fermin’s Allen Tate, who produced LP3, these songs exude a charismatic charm that belies the surreptitious despondency that runs through Hypoluxo’s new album.

Dream Chambers is the name for singer-songwriter Jess Chambers' experimental electronic explorations. From a background in delicately orchestrated folk music, she follows a transformative journey into music technology. Her sound, actualized through a mass of synthesizers, sequencers, and vocal processors, counterpoints heavy sub-bass with crystalline granular synthesis, noise, and vocal harmony. 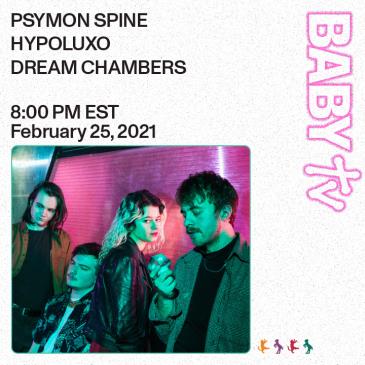