18+ welcome!
Tickets available at the bar or online!

Pinky Doodle Poodle
High energy Rock Band from Tokyo Japan.
In 2008, PDP has been started. PDP received many offers of gigs or interviews from the overseas fan who heard PDP music or gig by YouTube etc. In the following year, PDP did 4 times European tour (GB, FR, BE, ES, IT, LU).
After release of two mini-albums in Europe and Japan, PDP got offer from Mr.Robby Takac (GOO GOO DOLLS) who owns his own label GOOD CHARAMEL RECORDS in U.S.A. And then, the first full album was recorded at GCR audio in Buffalo NY(produced by PDP and Robby Takac).
In April of 2014, global debut album “PINKY DOODLE POODLE” has been released.
After that, PDP released 3 full length albums and 1 EP.
Performed at the biggest Japanese festival in U.S. and the greatest festival in Myanmar etc.
Touring in U.S.A. several times
The cover of the MC5’s song “Kick Out The Jams” from 2nd album “Inside is Out” got a good reputation, its music video was shared by MC5’s guitarist Wayne Kramer, drummerDennis “Machine gun” Thompson and Nights with Alice Cooper, too.
In 2018, PDP moved thire base from Tokyo Japan to Athens, GA in U.S.
In 2019, PDP is continuing the live touring energetically in U.S.!!
High Life
Leah,Vera,Charlie and Wil 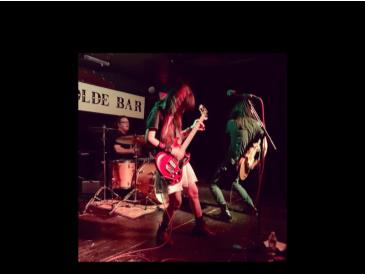