The band is currently putting the final touches on their highly anticipated, dbl studio album 'Something Good'. To be released in Spring 2020, this new 20 song opus is the band's 6th studio release, expanding on their unique brand of authentic, diverse, feel good RocknRoll. 'Something Good' offers something for everyone! Since the band's inception, Luvplanet's music has blended rock, jam, country, blues, pop and psychedelic sounds to created the template for a new era of world class music with universal appeal! Their songs are powerful, anthemic and memorable, and the band's live performances deliver a moving, emotional experience from high energy to deep and moody to artistic and psychedelic. A must see!

Luvplanet has garnered support strong from Northern California radio stations such as 97.7 The River, 107.7 The Bone and 95.9 The Krush.

Luvplanet stays true to their path of creating quality, long lasting and meaningful music with the desire to heal, soothe and inspire the listeners of music worldwide!

The band formed in 2019, put together by bassist and song writer, Gio Benedetti. The band is a constructive rebound from his long term band relationship: a 10 year career playing upright bass with The Brothers Comatose.

Now he gets to play lots of notes on electric bass and he's very happy about it. Band mates Zach Morris (drums), Alex Leach (guitar) and Nathan Dittle (keys) bring their charm, savoir faire, incredible skills and general loveliness to the material. Together, the four friends create a loose weave tapestry of whimsy, creativity, and energy as they groovily stumble between 70s funk, modern indy rock and acid jazz.

plus DOMENIC BIANCO AND THE SOUL SHAKE

It all started back in 2007 when Domenic and Charlie met. While ditching class Charlie was introduced to Domenic Bianco. As they sat in a backyard in Petaluma Charlie took notice to the Children of Bodom sweatshirt Domenic was wearing. Being a metalhead himself, Charlie asked Domenic about his interest in metal music and eventually the guitar. Domenic lived a couple houses down and quickly took Charlie to his room, the shred den in his parents garage. It was in these early moments that the fire had been ignited and their friendship was born! Domenic was a singer songwriter who began to make a name for himself through the years. It was in 2015 when the two would move in together and expand far past their guitar playing. The two would pick up and learn new instruments and began writing songs together. Soon after Domenic Bianco and the SoulShake began performing and would eventually record their first album, A Little Peace in the Puzzle, in 2017. After a few unexpected hurdles and a passion to further their dreams Domenic and Charlie were in search for a drummer. Perhaps a drummer with charisma and a kind heart, a potential brother with whom they could spread the message of love through music. They placed an ad on craigslist, not including those terms, nor expecting to find a gem. Their very first reply garnered a response from a man… John Hendricks.He was the gem they were looking for and eventually joined the two on their journey of traveling the world by means of music - always spreading positivity, love, and SoulShakin’vibes. 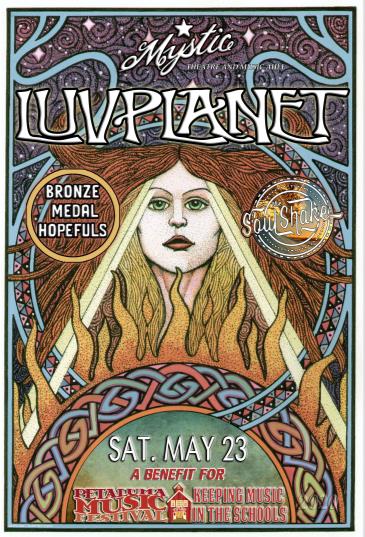