******************************************************************************************************************************************
“It’s the hardest thing we’ve ever done as a band to make this record,” says guitarist/vocalist Kaleo Wassman of Pepper, in speaking on the recording process of their new self-titled album. “It speaks loudly and widely to a broader audience while maintaining everything good about the band, which, first of all, is our positive attitude.” After releasing five albums, Pepper has opened a new chapter in their storied career. Drummer Yesod Williams adds, “This record feels very cohesive in a way our past releases maybe didn’t. I think it’s an album that can appeal to everyone, as well.  We’ve been pigeonholed in the past so this is an opportunity to transcend all that and spread our wings even wider.”
The trio, who formed in 1997 and moved to the mainland from their hometown of Kailua Kona, Hawaii in 1999, pressed pause after the release of their fifth album, Pink Crustaceans and Good Vibrations, in 2008. There was a sense of fatigue and disunity amongst the three musicians, who took some time off from music both apart and together before rejoining to create an EP, Stiches, in late 2010. The songs on that release re-energized the group, revealing an urgent desire to make a new album that reflected where they are in their lives and career now. After some tour dates in support of the EP, Pepper sat down and focused on their sixth album, a self-titled released that swings open the door on this new chapter.
The musicians went into the studio with Matt Wallace, a producer known for his work with Maroon 5, O.A.R. and Faith No More, in early 2012. Matt helped focus the group’s vision and expand their musical knowledge base, an experience the band members compare to being in their own version of college. The album was recorded in various studios over the course of a year, honing in on Pepper’s re-defined self-identity and how that focus was reflected in the songs.
“We learned so much,” Yesod says. “Matt help us really focus on the art of songwriting. He sat in the room with the three of us with a fine-tooth comb and went over every word, every melody, every sound. He showed us that it’s important what you do play as well as what you don’t play, creating both spaces in the songs. We learned how powerful simplicity can be. Plus, we had such a good time recording this album and I think that shows.”
The resulting album, self-titled to accentuate where the band feels they are presently, broadens Pepper’s style, veering into new sonic territory while still retaining all the fun elements that make the band so beloved by their fans. The ever-present sense of life surges through the tracks, bolstering the sense of optimism throughout. The party anthems, the beach hang melodies, and the boisterous rhythms are all there, each song carefully crafted to best express these sunny moments by the ocean.
“This album is basically 12 snapshots of where we are,” vocalist/bassist Bret Bollinger says. “There are songs that will remind you of your favorite Pepper songs, but by the end you’ll hear some unexpected things. You’ll realize that the songwriting is so much more refined. And there’s laughter in the background of the songs. That’s how good the vibe is on the record.”
Pepper has toured extensively with groups like 311, Slightly Stoopid, Flogging Molly and Sublime With Rome, and spent several summers on Warped Tour – and this live sensibility shows. You can almost feel the sand in your toes and the sun on your back as the album progresses, the musician’s amiable personalities palpable beneath the island rhythms and mellow tones. The band’s music – both live and on their releases – is really about enjoying life and being grateful for each experience, a sensibility that’s very familiar to the three musicians currently in their career. From their 1999 debut Give’n It to their 2006 standout album No Shame, which was recorded with 311’s Nick Hexum, No Doubt’s Tony Kanal and Butthole Surfers’ Paul Leary, Pepper has embodied not only a style of music but a lifestyle, one that’s most easily found on beaches across the world, but also one that’s relatable to anyone anywhere.
Released via their own label LAW Records, their universal appeal has led their music being placed in various movies and TV shows, including Forgetting Sarah Marshall and Good Luck Chuck, as well as several video game soundtracks. The band’s story to date has been a prolific one. But as Pepper turns the page into a fresh chapter with this new album, it’s clear that the band’s passion for music and life will continue on for years to come.
“We’re so blessed to be in this position,” Kaleo says. “We want to do the best we can with it. We had humble beginnings in our small town in Hawaii and we’re still that same humble band. We don’t take any of this lightly. Every day I wake up and think about how I have the best job in the world. The level of gratitude and happiness I have that we’re able to do this is incredible and I hope people can hear that when they listen to our new songs.” 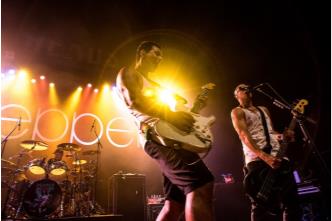