People Under the Stairs

LA based People Under The Stairs, Double K (Michael Turner) and Thes One (Christopher Portugal) are the most successful fully independent hip-hop duo in the history of Hip-Hop. Since their initial release in 1998, People Under The Stairs, or “The P” as they are referred to by their fans, have performed thousands of sold out shows, festivals and world tours spanning 6 continents and 40 countries. With a pioneering DIY ethic, they have self produced 9 full-length LPs & countless singles and side projects. The musical sensibility punctuating their unique style of hip-hop has earned them the title “The Steely Dan of Rap Music” as well as consistent critical acclaim and numerous appearances on the Billboard Charts.

Their extraordinary career includes an appearance on The Simpson’s 20th Anniversary Special, a John Peele Session at Abbey Road, and groundbreaking performances at festivals such as Glastonbury, Coachella and Bonaroo, the last of which SPIN magazine noted as “Simply the best performance of Friday... Period”. As part of their 10 year Anniversary World Tour in 2009, People Under The Stairs travelled to new continents with sold out shows in China, Brazil and Africa and main stage plays at Outside Lands Festival, Governors Ball NYC and many others. In 2013 the P completed sold out tours with Mac Miller and Girl Talk before returning to the studio to work on their 9th album, 12 Step Program, released in May of 2014 to widespread fan and critical acclaim. On 10/10/15, the world will witness the release of their epic tenth album: The Gettin Off Stage. 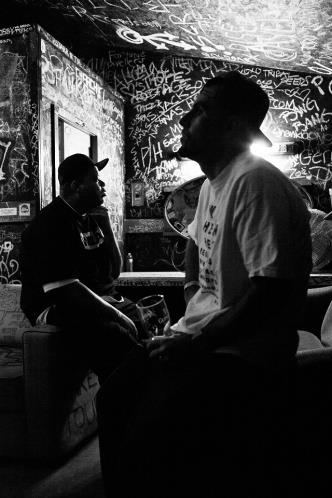 People Under the Stairs