Peekaboo at the OKC Farmers Market

Subsonix and Disco Donnie Presents Peekaboo and Zeke Beats at the OKC Farmers Market on February 6th, 2020 in Oklahoma City.

PEEKABOO grew up in Michigan outside Detroit. He started producing music where he was in high school and originally started making progressive house music. When he joined a fraternity in college, his brothers supported his music as well. He almost decided to quit music in 2016, but a friend of his helped him developed the stage name PEEKABOO. What originally started a side project would develop into PEEKABOO's original alien-bass like sound. [2]In April 2017, PEEKABOO released REVENGE EP. That same year, he collaborated with Bassnectar on the song "Disrupt The System." In May 2018, PEEKABOO released his Imposters EP off of the WAKAAN Collective which included some of his most popular songs to date including "Aliens" and "Arrival." [1] He is also a frequent collaborator with fellow Michigan producer, G-REX.


16+ to Enter -  No Weapons / No Drugs / No Drama - Zero Tolerance.  We reserve the right to refuse service to anyone for any reason. 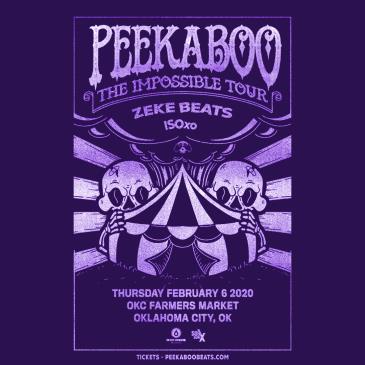