From the origin of a single remix, an extraordinary music career set in motion… Throughout its course, it has given rise to terms including ‘genre creator’, ‘artisan DJ’ and ‘studio maven’, as well as others like ‘activist’, ‘pacifist’ and ‘world-citizen’. All designations regularly used to describe the life of Grammy-nominated DJ/producer and dance music icon, Paul van Dyk. Following the scene’s first gleaming, 20 years ago, he became trance music’s internationally recognised torchbearer. From there he’s gone from vanguard to its single most enduring influence.

A virtuoso DJ, van Dyk circles the globe 16 times per annum, entertaining an average 3 million + music lovers along the way. He has twice taken the title of the world’s no.1 DJ - a feat achieved to-date by just two other spinners. On Barra Beach in Rio, during the 2008 New Years celebrations, he famously spun to an unprecedented (and then record) audience totalling 1.5 million. As a producer Paul’s achieved similar success. In 1994 he recorded ‘For an Angel’, a track that regularly tops trance music’s greatest-ever lists and 3 years later he remixed ‘Age of Love’, which also frequently contends that title. He continues to build upon one of EDM’s most outstanding remixographies. Artists who have received the Paul van Dyk hallmark remix have included mainstream superstars like Madonna, Justin Timberlake and Britney Spears. He’s also reworked more diverse acts, like industrial metal rockers Rammstein, as well as timeless bands like U2, Depeche Mode and New Order. Van Dyk is also a regular film and game score contributor, which has resulted in many notable OST credits. They have included his rework of Hollywood composer Hans Zimmer’s ‘A Poor Choice of Words’ for ‘The Dark Knight’ soundtrack and ‘Still Alive’ for EA’s ground-breaking ‘Mirror’s Edge’ game.

Two decades on from trance-catalysers like his ‘Love Stimulation’ remix, the early MFS releases and his E-Werk sets, scene-originator Paul van Dyk now stands on the threshold of his sixth full-length album. The successor to ‘45 RPM’ (1994), ‘Seven Ways’ (1996), ‘Out There And Back’ (2000), as well as the Grammy nominated ‘Reflections’ (2003) and ‘In Between’ (2007), it is, in ways small and big, an evolutionary release.

As the label owner of VANDIT Records, Paul uses the platform to break the music of likeminded contemporaries, as well as maintaining the rights to his own. A diehard radio devotee, he was one of the first DJs to fully harness the medium to transmit his EDM message. His revered, long standing Soundgarden show is now in its tenth year and he also produces and presents VONYC Sessions, which airs through the Area Channels of Sirius XM. Compilation-wise he’s has been behind several mix-album series, including 2 editions of his celebrated ‘The Politics of Dancing’ (2001 and 2005). Throughout his career he has amassed many international awards, for a wide range of activities. Among those are the illustrious Landesverdienstorden (Berlin’s Medal of Honour, given in recognition of his work towards social justice), a string of IDMA wins and Mixmag’s Man of the Year accolade.

“When I settled on this album’s title, it naturally related to the five EDM years which have past since ‘In Between’, says Paul. “As much though ‘Evolution’ is a reflection on the longer journey my career has taken. One that began growing up behind the Iron Curtain, through to where I find myself today. I feel that anything I had to strive to achieve back then will naturally be more valued now. This was the case with my connection to music throughout those formative years. Growing up, I listened to RIAS (Radio In The American Sector), which transmitted from West Berlin. Tuning in was actively discouraged”, He recalls, “but it became the only way to connect with a freer society and the outside world. As such I felt that music had even greater resonance for me. More than if there’d been all the media freedom of the west at any rate”. After a brief spell residing in Hamburg, Paul returned to Berlin at the start of ‘91. He made his first ever DJ appearance in March of that year, during the opening month of fast-to-become-legendary techno temple, Tresor. From there he began to build a spinning career, which, by ‘97 had unlocked the door to its highest echelons. As the twin phenomena of Superclubs and the DJ-as-a-rock-star landed, he found himself not only as trance’s most synonymous producer, but also its figurehead DJ. From that point on van Dyk has held sway over dance floors in every EDM-speaking country in the world. He holds the record for the longest unbroken run inside the ranks of the world’s Top 100, has twice reached the no.1 position, and spun under every major tent-pole on the planet.

Drawing on this wealth of DJ experience and ability in an entirely new fashion, Paul put his deck time to unique effect for ‘Evolution’. Throughout the 10 months leading up to its completion, he brought each track in turn to dancefloors in order to test run them. Using a portable, customized, hybrid production/DJ set-up, he introduced new harmonies, melodies, note arrangements, bass and FX on each. Trialling them on the fly and literally evolving the tracks real-time, this method gave him invaluable, first-hand floor-feedback. Of this technique, Paul said: “I’m not sure if clubbers realized it at the time, but they were essentially interacting with the music making process of ‘Evolution’. Their reactions were showing me which direction each of the tracks should take”. This inventive ‘club-becomes-a-studio’ system has helped van Dyk craft what is without doubt the most dancefloor-orientated album of his career.

The evolution will be realized

With a next-level album in motion, van Dyk pushed its range further through an increasingly favoured studio method. Seeing the collaboration as a natural bridge for a positive exchange of influences, his early years gave rise to many landmarks. These included ‘Flaming June’ and ‘Namistai’ (with BT), the embryonic ‘Visions of Shiva’, as well as vocal collabs such as ‘Tell Me Why’ with Saint Etienne and ‘Fall With Me’, with Talking Head, David Byrne. For ‘Evolution’ though he pushes this co-production dogma into supernova. On ‘Eternity’, with Owl City’s Adam Young and ‘If You Want My Love’ featuring Swedish alternative-rockers Caligola (from Mando Diao), he blurs the boundaries of the electronic and non-electronic music. Working together with Contemporary Christian music doyen Plumb, they created the brooding, emotive sear of ‘If I Don’t Deserve You’. It also sees Paul resume his already productive Berlin/Miami connection with Austin Leeds and, likewise, create two tracks with Russian wunderkind Arty. He’s also back working with regular kindred musical spirit, Giuseppe Ottaviani and co-producing for the first time with techno/tech-trance don Ummet Ozcan.

In solo mode meanwhile, on ‘Rock This’, PvD pointedly (and thoroughly) subverts the rules of the EDM sub-genre. A truly maverick track, it sees him experiment with several electronic dance styles, all inside the confines of a single piece of music.

With this mass of new PvD music now in hand, the time has now finally come to take the finished tracks to clubs, arenas and festivals around the world. There, Paul will personally introduce them to fans old and new, as part of the mammoth 50 date Evolution World Tour.

With production complete, additionally it allows Paul time to rededicate to his other projects. Among them is his Rückenwind (Tailwind) charity, which seeks to maintain a thirst for knowledge in underprivileged children. It’ll also provide him with more time to engage in his longstanding political involvements, specifically his work with anti-war movements and organizations. 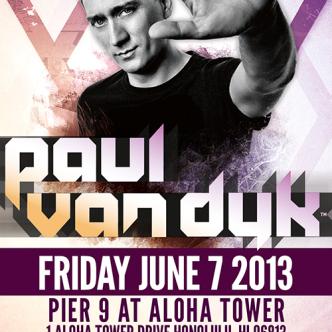