Returning to AVALON is Godfather of dance music, Paul Oakenfold with support of DJ Fluencee, Mark Lewis and Varun.

Oakenfold is globally recognized as one of the pioneers of the trance genre. There is no question on how the man has built an empire for himself for over three decades now as a revolutionary and innovative producer and DJ. Landing himself two Grammy nominations, not to mention his climbing of Mt Everest where he DJ’d atop of it, he has branched his skills effectively outside of the EDM world. Paul has collaborated with other legends like the pop star Madonna, and Irish rock band, U2. Weaving his way into the film industry, he is responsible for creating impeccable soundtracks in some of Hollywood's top leading movies like Matrix Reloaded, Swordfish, The Bourne Identity and many more. Paul is known to also deliver some of the best DJ sets in the world.

Co-headlining with Oakenfold will be Fluencee. This trap and bass star is recognized for going beyond when writing his music. His influences include the struggles of a stutter he has had since a child; his name is a part of his own tribute providing music that speaks so clearly it touches you deeply. Receiving support by artists like Tommy Trash, TJR, Firebeatz and of course, Paul Oakenfold, he’s a sure-to-be shining star in dance music.

To top off the eventful evening filled with skillful music is the leading support of Mark Lewis and Varun. 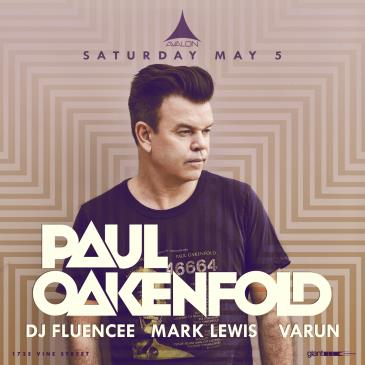