Paul Oakenfoldis the UK’s number one DJ. This simple statement,however, doesn’t even begin to properly acknowledge Oakenfold’s stellar contribution to our musical landscape. His signature can be seen in everythingfrom the early rise of hip-hop and the re-invention of British dance culture to the Balearicexplosion and the birth of ‘Madchester’.

Indeed, it’s a testamentto Oakenfold’s restlesscuriosity and imagination that his career shows no signs of diminution, even after two decades. A snapshot of his activities through the summer of 2001, for instance,finds Oakenfold hosting Perfecto nights in Ibiza before travellingto America where he’s the headline DJ on Moby’s ambitiousArea:One festival tour. After that, there are DJ dates everywhere from Buenos Aires and Mexico City to Clapham Common.

Oakenfold has also contributed the soundtrack to America’s number one box-office movie, Swordfish, the release of which is closely followedby the Perfecto Presents Paul Oakenfold in Ibiza DJ mix album this summer. A relentless schedule that emphasisesOakenfold’s growing global status.All this began in the late-Seventies when a very young Paul Oakenfold, together with his friend Trevor Fung, cut their musical teeth by mixing soul and rare-groove at a basementbar in London’s Covent Garden. His imagination stirred, Oakenfold decidedto find the roots of his new-foundobsession by moving to West Harlem in New York.

Oakenfold worked as a courier for local dance radio stationsin the Big Apple. By night he checked out the city’s burgeoning new club environment, witnessing the extraordinary birth of hip-hop.Fired up, Oakenfoldwas determined to break into the music industry.

Returning to London, Paul landed a job as an A&Rman at Champion Records. He had a keen ear and quickly signed Jazzy Jeff & the Fresh Prince - the latter, of course, to be subsequently revealed as Will Smith - and Salt n’ Pepa.

From Champion,Oakenfold moved to the London offices of Profile and Def Jam. By this time, however,he was increasingly interested in DJ’ing and producing, twin ambitions that were soon to be amply fulfilled. 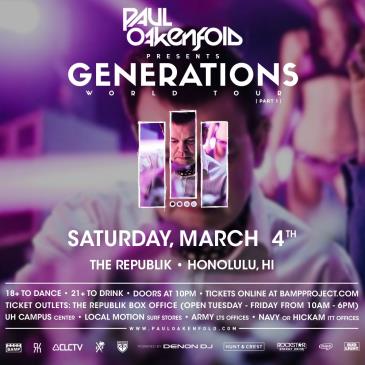