with support from Palehound and The OBGMs

It seems significant that there were bats in the mansion’s attic, although how significant it seems will have something to do with how you feel and what you know about PUP. None of it is a metaphor, and also all of it is.

The mansion, for its part, is very real—it is a sprawling residence-slash-studio in Connecticut’s most dispiriting mid-sized city where the producer Peter Katis has helped acts like The National and Interpol and Frightened Rabbit and Kurt Vile make records. There are gold records on the walls and warrens of strange new rooms that the band members discovered seemingly daily; the roof leaks when it rains, and the bats reclaim the attic after dark. PUP singer Stefan Babcock recorded all his vocals in the living room, at night. “The other guys were just trying to live their lives,” he said, “and Nestor and I would be down there screaming into microphones while they were watching TV in the next room.” Babcock remembered Katis telling him that the bats “go away” during the daytime hours. “I was like, ‘no, they’re sleeping,’” Babcock said. “They don’t go anywhere, there’s nowhere for them to go.’”

The band spent five weeks there in the summer of 2021, recording and mixing the typically furious and anthemic songs that would become their fourth album, THE UNRAVELING OF PUPTHEBAND. The band—Babcock, bassist Nestor Chumak, drummer Zack Mykula, and guitarist Steve Sladkowski—more or less never left. “There were some days that were really great, like magical, everything worked and then we’d go to the kitchen and make a great meal,” Sladkowski said, “and then there were days when you’re like ‘I can’t remember the last time I’ve been outside.’” Circumstances—a global pandemic, still happening, not much fun to talk about and won’t be addressed further here—made cultivating a healthy, communal vibe more difficult, but the band powered through by having friends like Sarah from Illuminati Hotties, Kathryn from NOBRO, Mel from Casper Skulls, and Erik from Remo Drive pitch in. When the band got comfortable in its strange new home, the (figurative) walls came down. “As the weeks passed, we seemed less and less rational, objective, and sane,” Babcock says. “You can hear the band start to fall off the cliff, and because of that, I think this record is our truest and most genuine to date. There is nothing more PUP than a slow and inevitable descent into self-destruction.”

Every PUP record arrives with an implied “contents under pressure” warning; the tension between the band’s instinct for the melodic and its gift for chaos propels the songs forward while making them also seem close to flying apart in a horrifying spray of tears and gore. To listen to PUP enough is to spend parts of every day mentally echoing some hilariously self-lacerating, utterly undeniable choruses; you will find yourself thinking “this is the mosh part” at moments when you would otherwise be tearing yourself apart. It is one thing to feel, as Babcock sings on THE UNRAVELING’s “Totally Fine,” “like I’m slowly dying/and if I’m being real I don’t even mind,” but it is another, very different thing to find yourself shouting along with those words. There’s a tension here, too. “There’s only so many times you can write a song about how much you hate yourself before you write a song about how fucking good you are at hating yourself,” Babcock says. “It’s funny that we’ve provided for ourselves by being fuck-ups and writing songs about being fuck-ups. We’ve been fuck-ups forever, and now we’ve got a responsibility, to others and to ourselves, to fuck up in a productive manner.”

That’s not any easier than it sounds, but also the volatility is the thing; all that tension is always just barely held in place by the band’s craft. It couldn’t be anything but uneasy, but THE UNRAVELING OF PUPTHEBAND is the sound of a band that is not just comfortable with but in command of that chaos.

We are back in the mansion, now, albeit the metaphorical one. PUP is objectively a very successful band. They won a Juno Award for Alternative Album of the Year for 2019’s Morbid Stuff and have been nominated for the Polaris Prize and many nice things have been said about them in the places that people say nice things about bands; because they are PUP, "nice things" in this case means Pitchfork saying that they “turn self-loathing and self-deprecation into a sort of superpower.” Fans happily sing the coruscating words of their songs aloud in sold-out venues all around the world; they did a version of arguably the harshest song on 2019’s Morbid Stuff for a 2020 CBC Kids Christmas special in which they replaced the lyric “embrace the calamity” with “embrace the festivities”; they have performed on Late Night with Seth Meyers, and played at major festivals like Lollapalooza, Boston Calling, Shaky Knees, and Riot Fest. A mansion is a place where such a band might go to record an ambitious fourth album. That success doesn’t haunt THE UNRAVELING, although it does make it funnier; the “Four Chords” piano ballad threaded through the album tells the tale of a contentious quarterly meeting of PUP’s “board of directors” going selfishly awry. There is a long history of Mansion Albums; sometimes it works out well and sometimes it works out less well and more often than would seem plausible a Jaguar convertible winds up at the bottom of a swimming pool.

PUP is not really that kind of band, though, and THE UNRAVELING OF PUPTHEBAND is not that kind of record. It is still very much a PUP album, but relocating from the literal basement where they wrote Morbid Stuff to the janky manse in which they put together its follow-up afforded the band space to grow, and to make not just the next PUP record but the most PUP record. “This is a band that, until this record, out of some weird fucked up sense of misguided pride or idiocy, felt that we should never use any instruments aside from drums, bass, and guitars,” Babcock says. “We quickly came to realize that the instrumentation isn’t what makes PUP songs PUP. It’s the songs themselves, finding this balance between heavy and melodic, dark and fun, pushing the limits of our writing chops and musicianship in a way that makes us laugh and also want to smash shit. So this record starts with the stupidest piano ballad of all time. And there are synths. And there are horns. And there are some 808s and trap hi-hats. And some other weird shit that we haven’t done before.”

There is no faking that, which of course makes it all much harder to do. In the best PUP songs, the whole process is not just visible but thrilling—the anguish and doubt that drives the songs is nurtured, over a few loud minutes, into something first legible and then somehow empowering. There are a lot of these songs on THE UNRAVELING. The alternately plaintive and anthemic “Matilda” is a classic galloping PUP shout-along recrimination-fest that sounds bigger than previous entries in this robust subgenre without losing any of the signature acid. “Waiting” is pure paint-stripping heat, topped by some legitimately towering choruses. “Robot Writes A Love Song” dissolves into a wash of nervous synthesizer before becoming what is surely the most emotional song ever written from the perspective of a computer being overwhelmed unto death by actual human emotions. “I wanted to write about the horrible state of the world, but through a very specific and personal lens,” Babcock says. “It’s a lot of me trying to articulate my own coping with existential dread, hopelessness, and what I’ve called ‘Grim Reaping’—which is to me, the idea that we are all reaping what we sow, and right now we’re sowing some pretty fucked up shit.”

THE UNRAVELING is not a departure from what got PUP here, really; for all the new breadth, this is still very much the fourth album by the band that has spun songs about The Bad Decisions Lifestyle into scrappy art. The hooks are as bright and barbed as always; the poison threaded through every song is no less potent. But a fourth album should be different from the first, or even the third, and THE UNRAVELING is. “I don’t know that we set out to do new stuff,” Mykula says, of a record on which the band does a great deal of new stuff. “It’s just a band trying to sound as much like themselves as possible. Every record you make, you get closer to that.”

THE UNRAVELING OF PUPTHEBAND is that next step—not towards perfection, or even towards some more perfect version of writing songs about fucking up, but just in the direction of its choice. It’s a product of this endless awful broader moment, but also very much a step forward into that uncertainty. “The whole album process really brought us closer together, even as things unraveled,” Babcock says. “It’s hands down my favorite PUP record, and I don’t think it could’ve been made under any other circumstances.” It’s the sound of a band learning how to share the mansion with the bats. 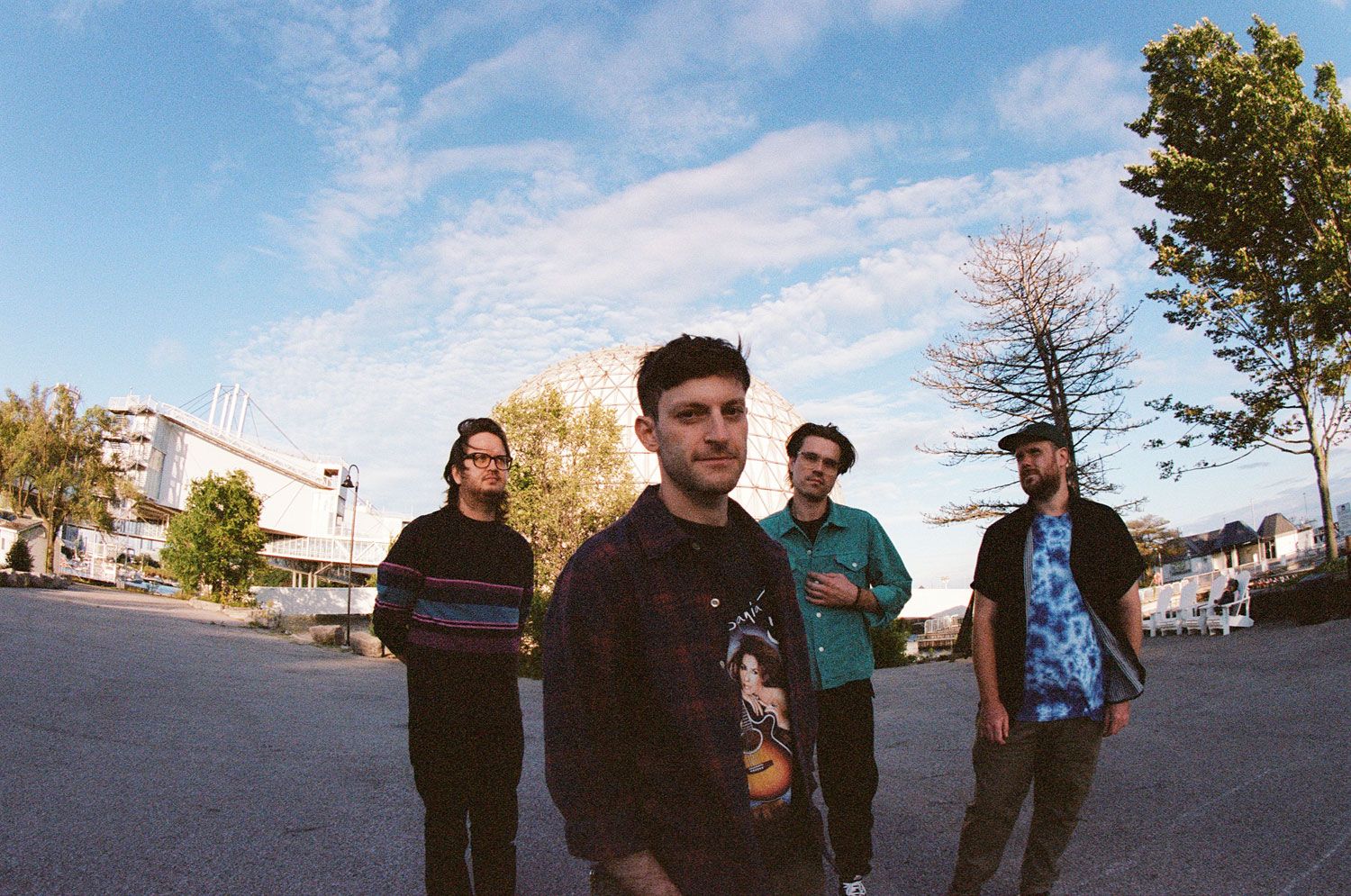