"Icon of independence since the early ‘90s, Justin Pearson obeys no one’s rules. Vocalist, bassist, record label owner, author, and actor, the born leader has made a career of staying one step ahead, confounding both the mainstream and the underground in the process."

"Pearson and Henshaw have created something truly unique and special with Planet B. This is musical genre-splicing of the highest order and is easily one of the most exciting and fresh sounding albums released this year."

“Setting themselves apart from other artists taking on similar subject matter, Planet B zero in on the emotion at play for that much more of a lasting impact. Rather than presenting just something to think about, the band play music to feel as well, letting their work prove just inescapable.”

“Planet B is a rich tapestry of ideas and creative juices that have been allowed to flow with little to no boundaries put in place. What we have is an album that feels like it has come around at the right time with the right message and enough crossover appeal to get many a head nodding in approval.”

"From malformed industrial, to acid-laced sci-fi EDM, to bizarre interpretations of hip-hop, Planet B‘s self-titled debut is, needless to say, a unique one. Comprised of vocalist Justin Pearson (Retox, The Locust, et al) and producer Luke Henshaw, Planet B sets out to pick apart, reassemble, and combine typically non-complementary styles and aesthetics into jarring, exciting sounds..."

“Planet B picks up the sonic torch from 90s politico-industrial hip-hoppers Consolidated and high-octane punks The Death Set and rocks and grooves while skewering President Tiny Hands and the American Way with barbed and aggressive lyrics. In fact, it’s not too much of a stretch to suggest that it’s how 80s political punks the Dead Kennedys might have sounded if they’d dropped their guitars in favour of electronic noise and beats.”

As the founder of Three One G Records and a member of such bands as Swing Kids, The Locust, Retox and Dead Cross, Justin Pearson has existed as a leader in the underground for almost three decades. As label owner and musician, he has put his artistic, politically-charged stamp on hundreds of releases, and has influenced thousands of people in the realms of hardcore punk, noise-rock, and beyond.

The duo’s music lays somewhere just out of reach of genre, with aesthetics rooted in hip hop, hardcore punk, turntablism, and 70s-80s horror movie soundtracks. It is catchy, heavily percussive, and eerie all at once. Henshaw’s fantastical sci-fi accompaniments utilize Justin’s whistling UFO vibrato, for example, and apply it to dark and distorted electrical hums, claps, and marching band drum beats. Here, no sound is beyond their experimental scope. 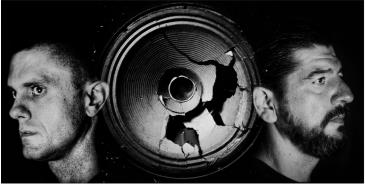