Come spend the first Friday of the new year at AVALON Hollywood’s first CONTROL Friday of 2019 with PIERCE and Blaqout. If you’re looking for a night filled with deep bass and refined beats, this one’s for you! The stage will be graced with two of Los Angeles’ own masterminds in the underground scene for an unparalleled night.

Taking the stage for a set filled with bass and hardstyle trap is PIERCE. These past few years have been pivotal for him as he’s had releases on Spinnin’ Records in 2016, Insomniac’s Bassrush Records in 2017, and most recently, his latest track with Eliminate titled “With Me” feat. PLTO was just released on Disciple Records. After 6 years of molding his production and performance style, PIERCE is continuing to make waves in the electronic music scene year after year. Herobust, Jauz, Spag Heddy, and Doctor P are just a handful of the notable names that have shown support for PIERCE.

Co-headlining the show will be bass music aficionado Blaqout. After moving from St. Louis to Los Angeles to pursue his passion of music, he’s proved himself successful with major releases on Buygore Records, Borgore’s own label, and Firepower Records, which boasts an impressive roster of talent including Kayzo, Bear Grillz, YOOKiE, and more. In 2017, his single “GTFO” with D-Jahsta and Uzzi climbed to the #1 spot on the Beatport release chart, causing his fan base to grow even further. He’s racked in praise from artists such as Zeds Dead, NGHTMRE, and Slander, so expect to be blown away when he joins us on the fourth.

Make sure to kick off your first weekend of the new year the right way with PIERCE and Blaqout. Grab your tickets now and join us for an undoubtedly epic night. 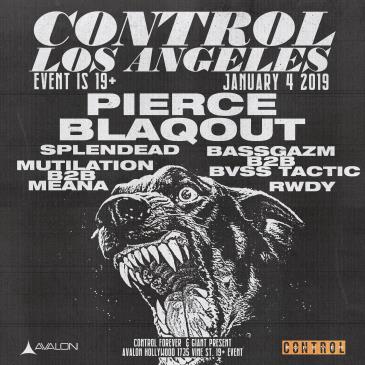