Noe’s music invites you to journey to your inner fringes to connect with your wild soul. Lose yourself in acoustic soundscapes infused with classical, world music, and art-pop elements. Sing along to stirring lyrics that evoke the mythic, always with a fresh turn of phrase.

At this show, Noe will play Celtic harp and guitar, and will be accompanied by Alan Lin on Violin.
As an independent artist, Noe has built a loyal following around the world. She has toured twice nationally with Ani Di Franco, shared stages with Patti Smith, They Might be Giants, Dar Williams, and many others. She has seen her songs featured in film, appeared on national television, and twice been nominated for a California music award for Best Female Vocalist. Her voice can be heard on releases by Ani Di Franco and Vienna Teng, who also covered Noe’s song, Midsummer Night’s Dream.

The SF Bay Guardian wrote that her music “stuns and enraptures so thoroughly that multiple listenings are required to unravel her mysteries of music and meaning.”

And PureMusic said, “Here we have a home grown, full blown musical visionary. This train is headed somewhere.”
Along with her music, Noe provides an active online community where listeners connect around nature, spirituality, and the creative life. 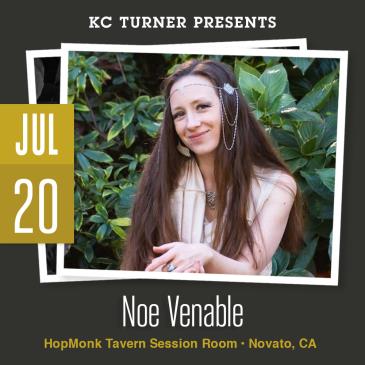