Evolution is the only constant in the landscape of Hip-Hop music. Styles shift like tectonic plates in every aspect of the genre, ranging from lyrical content, rhyme delivery, regional trends, fashions and business models. The new pioneers of this ever-expanding frontier are the artists who recognize the necessity in blazing one's own trail, all while celebrating the ground broken before them. NoCanDo has understood this truth from the moment he first burst into the rap scene, and he continues to evolve to levels other emcees can't even imagine. Born in Northern California’s Bay Area, but raised in Los Angeles, NoCanDo developed his witty, acerbic style in the very streets that reared him. Cutting his teeth in the local battle rap arena, NoCanDo took on all challengers, indiscriminately serving both veterans and newcomers alike, while spending countless Thursday nights with his Customer Service Crew in the renowned Lemiert Park district, honing his craft and mastering his improvisational skills at The World Famous Project Blowed open mic. Following his acceptance into the Blowed ranks as a bonafide rhyming heavyweight, he took his razor sharp wit, humor, and delivery on the road, electrifying audiences all over the country with an energetic stage show only fitting for the young, yet fully seasoned performer. His reputation solidified and grew in 2007 with his victory in the MC battle at Scribble Jam, the largest Hip-Hop festival in the United States. Since then, NoCanDo has taken his legend abroad, performing all over the world in England, France, The Netherlands, Germany, Colombia, and Japan, electrifying crowds with his brash and confident stage presence and a bitingly sarcastic, yet seemingly effortless flow, leaving audiences with a ravenous hunger for more. NoCanDo delivered just what fans craved, releasing his critically acclaimed debut album, Jimmy the Lock, on Alpha Pup Records in 2010, all while splitting his time as resident host of the innovative and world renowned Low End Theory club, and as founder/CEO of Hellfyre Club Records, a prominent indie rap label home to esteemed artists such as Sahtyre, Open Mike Eagle, VerBS, Pistol Mcfly, Subtitle, and slew of others. NoCanDo continues to work tirelessly, freestyling each week at Low End Theory, releasing various independent mixtapes, EPs, and singles from himself and his Hellfyre Club alumni, and collaborating with artists such as MURS, Aceyalone, Busdriver, Abstract Rude, Free the Robots, and Gaslamp Killer. Currently, Nocando is gearing up to release his highly anticipated sophomore album in 2012, entitled Jimmy the Burnout. Constantly growing and evolving, MC NoCanDo has earned the respect of his contemporaries and the adoration of his fans around the globe. Sometimes hilarious, often poignant, NoCanDo always delivers an unpredictable performance that brilliantly embodies both the polish and sophistication of the mainstream and the undeniable raw, unfiltered, creative energy of the underground. Ever one step ahead of the constantly turning tides of the Hip Hop and Electronic communities in Los Angeles and around the world, NoCanDo and his Hellfyre Club are poised to give fans worldwide a sound and a message that rings true, all birthed from the streets of L.A. and the constantly churning mind of NoCanDo.

Since the fall of NY’s iron fist rule over rap, it seems like every couple of months someone declares, “NY is back.” It’s usually someone trying to push a new rap cat to the Hot 97 crew. Those dudes are aight, but, they always seem to miss one thing — actually reppin’ what it’s like to live in NYC. Cats will rep the drug trade of the city or the club scene but miss out on what the rest of us who aren’t living New Jack City coke dreams are fucking with. Yeah, you gotta have a song about someone getting stomped out with a pair of Timbs but you also need a song that reps Kennedy Fried Chicken.

Mr. Muthaf*ckin’ eXquire comes with a slow drunken master delivery on Lost In Translation, he drops song after song that combines the grittiness of NY with a soundtrack that weaves in and out of noisy, experimental bangers. These are songs that remind you of the heyday of experiential NY rap while occasionally throwing in random references to Marvel comics and American Ninja to put the whole shit in perspective. Basically, these joints sound like the time you saw a Mexican dude and a Chinese dude arguing in Spanish while a garbage truck backed up and someone drove by blasting the bass line of “Grindin.” You know Thursday night on Flatbush Ave.

With production from cats like El-P and Necro the album knocks pretty hard while eXquire lays out tales of waging a war of attrition with his liver, fucking horrible women, pissing in between subway cars, staying up way too late and eating at off brand chicken places. If that doesn’t encapsulate the life of mad heads in NYC then we’ve finally lost the war against Guilliani’s Disneyfication of the city.

Mibbs has arrived. As the original, founding member of the hip hop trio, Pac Div, Mibbs is branching out – new venture, new energy and new sound. Building off the initial success with his group (including two LPs, and countless tours/concerts with Snoop Dogg, N.E.R.D, Kid Cudi, Q-Tip, Nas, and more), Mibbs is finally grabbing the mic on his own. In an ever-changing industry, plagued by a formulaic approach, Mibbs is looking the other way and breaking fresh ground. With so much more to offer than just one “style”, Mibbs plays with varied musical influences and genres, pushing his audible vision past the current constraints in hip hop.

Mibbs continues his new year kick off with fresh visuals from creative director Lane Stewart, and performances throughout the West Coast. Spring brings appearances at SXSW and the digital release of the FREEBASSkg REMIX project featuring exclusive remixes from Norway’s Pieces of Juno, and Soulection’s Esta and AbJo. Summer ushers in showcases at NXNE and shows with Pac Div. Fall sees the launch of the GET WITH THE PROGRAM tour, and 2014 rounds out with the digital release of Mibbs’ third EP, True Romance, a five song project produced by Chicago producer/mc Tree.

This is what Mibbs has been waiting for. You’ve been warned. There are no rules. Anything goes. Mibbs over everything. 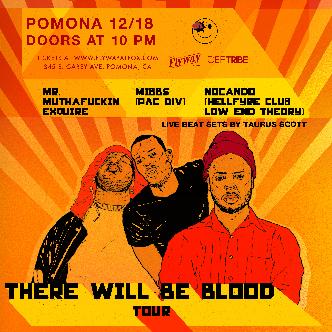