No Mana is bringing this ELECTROMAG tour home to L.A. with EDDIE as special guest!

Inheriting his grandad's love for techno and trance at a very young age, L.A,-based producer No Mana (born Jordan Orcaz) grew up surrounded by electronic influences, which, as is often the case, made him interested in producing. Debuting with a remix of Black Morphs & Elexem's "You & I," the young producer quickly caught the eye of electro heavyweight deadmau5, who promptly signed Orcaz to his mau5trap label. Maintaining his video game-inspired aesthetic, the producer made his label debut with the two-track "1UP" (2015), followed that year by sequels "2UP", "3UP", "4UP, "5UP", and singles "Tell Me" and "Claws." A varied set of offerings, the musician's early efforts danced through genres from trance to electro house, bound by a punchy, crisp sound reminiscent of mau5trap's founder.

Continuing with the UP series, 2016 saw the release of another four volumes ("6UP" through "9UP") alongside the producer's debut EP, Game Over. A subsequent EP, Above the Blue, arrived the following year, bookended by the heavier anthems of "10UP" and "11UP". It was 2018 where the young producer kicked his output into overdrive; while keeping the UP' series going strong with volumes 12 and 13, the producer released two 30-plus-minute mini-albums, Assorted Repetitions and Melted Candy. After pushing through 2019 with "14UP" and a set of singles, Orcaz released his debut album, Secret Level, in February 2020. Retaining the banger-centric ethos of his career thus far, the project built primarily on the electro house aspects of his work, featuring collaborations with Chipzel, Voicians, Jantine, and EDDIE. ~ David Crone, Rovi

Mau5trap back in the house!

Ticket(s) purchased via this website may be claimed at the WILL CALL desk at AVALON only on the night of the event. Please bring the credit card used to purchase the ticket(s) along with a valid PICTURE ID documenting that you and your guest(s) are at least 21 years of age. Photocopies will not be accepted.

You may log into your ticketing account to transfer ticket(s) to another attendee's name. When transferring a ticket, the credit card is not needed at Will Call pick up, but the ID must match the name of the person picking up tickets, no exceptions. 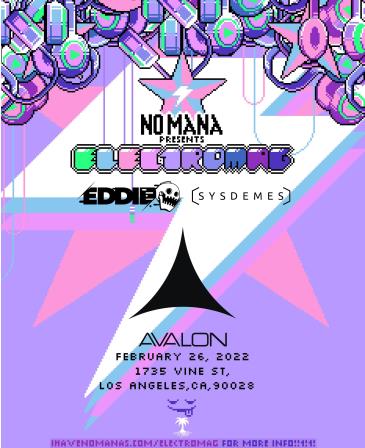