Pop-punk icons New Found Glory have announced a fall co-headline tour with Yellowcard, along with special guest Tigers Jaw! The tour is set to kick off on October 8th in Scottsdale, AZ and wrap on November 22 in San Diego, CA. “Yellowcard and NFG share a lot of the same fans and we knew putting together a tour like this would make a lot of people happy. Both bands have long careers and out lasted the trends to develop real core fans. Tigers Jaw is an awesome band that I love who also have a cult like following! Gonna be fun getting to watch them every night on the tour.” says guitarist Chad Gilbert.

Special VIP packages are available, which include early entry (*ticket not included and must be purchased separately through Livewire), limited edition 7” of New Found Glory covering Yellowcard’s “Illuminate” and Yellowcard performing New Found Glory’s “Ready and Willing” (only available as part of the VIP package), as well as a photo opportunity with both bands together, and exclusive poster and laminate.  More info can be found here: http://ticketspin.com/nfg-yc

New Found Glory is set to perform with Hayley Williams of Paramore at the 2015 Journeys Alternative Press Music Awards. The band is also nominated for Artist of the Year and Cyrus Bolooki for Best Drummer. Fans can purchase tickets to the APMA’s and vote now here: http://www.altpress.com/apmas.

New Found Glory released their newest studio album Resurrection on October 7th via Hopeless Records. The album debuted at #25 on the Billboard Top 200 Chart, surpassing the band’s 2011 release, Radiosurgery, in both sales numbers and charting position. Resurrection is available for purchase on iTunes here: http://bit.ly/1NHomYe. 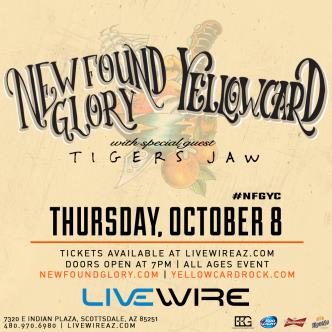