CONTROL Fridays welcomes Neon Indian for a DJ Set and Party Pupils on August 10th at the AVALON Hollywood.

Neon Indian is known for their sample-driven electronic pop and experimental sounds. Their indie-electronic stylings have put them in a genre of their own. Since the summer of 2009, Neon Indian has gathered inspiration from disco to classic rock, and the result is unique and beautifully produced music. Neon Indian’s work has ranged from playing music festivals to writing film scores, and now they are hitting the stage at AVALON.

The groovy electronic music duo, Party Pupils is also gracing the stage with their electro-funk vibes. They have produced groovy electronic remixes of songs like “Ms. Jackson” by OutKast and “This Is How We Do It” by Montell Jordan. Their music is reminiscent of a high energy summer block party.

Catch this night of disco dancing and electronic funk with Neon Indian’s DJ Set and Party Pupils at AVALON Hollywood on August 10th. 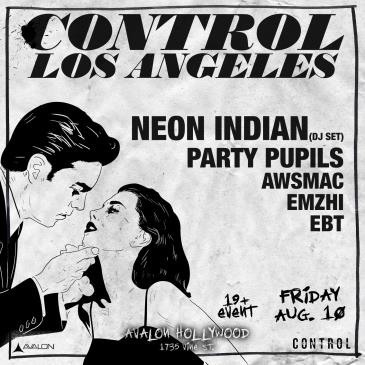