Art reflects life. Extreme times demand extreme responses. Silence sucks. Noise is always the answer. And yes, NAPALM DEATHcontinue to be one of the few bands on this planet that adhere to all these principles and more. For the last three decades,their name as been synonymous with heavy music taken to the extreme – music that confronts, confounds and eviscerates inequal measure.

NAPALM DEATH’s enduring impact on the world of sonic savagery began in earnest in the late 80s, when the band’s first twoalbums – 1987’s Scum and its 1988 follow-up From Enslavement To Obliteration – refined and redefined the notion of brutalityand velocity in the worlds of punk, hardcore and metal. Endorsed by legendary and much-missed DJ John Peel, the Brummiegrindcore pioneers were such an exhilarating and yet alien dose of jolting adrenaline that even the mainstream media wereforced to prick up their ears and take note. Throw in the fact that NAPALM DEATH were – and still are – driven by a ferociousintelligence and a genuine desire to make the world a better place through the promotion of rational thought and respect for allfellow humans, they stood apart from the often nihilistic and intellectually bankrupt underground metal scene and have re-mained unique and unerring ever since. While grind purists may point to those earliest records as evidence of the band’s signifi-cance, it is the tireless and terrorising exploits of the now classic line-up of vocalist Mark ‘Barney’ Greenway, bassist ShaneEmbury, guitarist Mitch Harris and drummer Danny Herrera that have cemented NAPALM DEATH’s status as extreme music leg-ends. Over the last 20 years, the band have released a relentless slew of groundbreaking and fearless albums and other releasesthat have consistently punched holes in the heavy music world’s perimeter fence, espousing an indestructible credo of creativityand lyrical fire along the way.

However, unlike the vast majority of so-called veteran bands, NAPALM DEATH seem to be gaining momentum and focus as theirstory continues into its fourth decade. Albums like Smear Campaign (2006), Time Waits For No Slave (2009) and Utilitarian(2012) have proved beyond doubt that while their creators remain firmly at the forefront of the grindcore scene, they are alsoincreasingly capable of expanding the boundaries of their own sound while exhibiting an undying passion for incorporating themost unimaginably intense and perverse fresh elements into their otherwise remorselessly fast and furious blueprint. And now,with the release of their fifteenth studio album, Apex Predator – Easy Meat, the undisputed Gods of Grind are poised to shatterpreconceptions and redefine what it means to be truly extreme all over again.

“I guess the word to use is thrusting! It really goes for the throat!” says Barney. “People probably look at NAPALM and think‘Fuck me, is that band still around?’ There’s a natural tendency as bands go on, that people on the outside say ‘Oh, they’re stillmaking albums but they must be a bit humdrum now...’ and you know what? That’s something that I hope no one ever says aboutus. I find I don’t want something more refined or less extreme, I want something more extreme. Sometimes we’ll be in the stu-dio and someone will say ‘Isn’t that a bit noisy?’ and I’ll say ‘Fucking hell, what do you mean? Turn it up! Let’s go and throw amicrophone through the speaker!’ So that’s our attitude. The age of the band should never come into it. Just because you’reolder, it doesn’t mean you lose the urge to make something challenging... or even annoying! Some of the sounds that NAPALMuse are deliberately designed to annoy people, no question!”

A sprawling and frequently bewildering onslaught of fervently left-field and fiendishly inventive extremity, Apex Predator – EasyMeat takes everything that NAPALM DEATH have learned, absorbed and harnessed over the last 30 years and twists the resultantmaelstrom into an unfathomable, tooth-shattering squall of ferocity. There is plenty of the hyperspeed grind that fans have longbecome accustomed to, but the more artful and dissonant elements that have long lurked within the band’s sound have beenbrought violently the fore like never before. As influenced by Swans, Killing Joke and Throbbing Gristle as they are by Siege,Celtic Frost and Discharge, these new songs add a wild array of new textures and tones to NAPALM DEATH’s sonic realm – allmixed to abominable perfection by long-time studio comrade Russ Russell - as slow-motion psychedelic sludge, barbaric post-

“The title track, it’s like Public Image Limited times ten!” says Barney. “It’s really extreme. There’s a lot of those influences onthe album – Public Image, Killing Joke, Swans... all that kind of stuff. We were starting to do it on the last album, mixing it intothe fast stuff, but this time we’ve mixed it in even more. Some of the chord stuff on there is pretty fucking mad. It was inten-tional. Sonically, we wanted it to be even more extreme. It’s quite simple. We’re not fucking around! Therein comes the para-dox. You’ve got the really nasty, horrible, violent sound and then the really humane lyrics. I love that paradox.”

Once again proclaiming their refusal to stand by while the world plummets rapidly down the shit-chute, the new NAPALM DEATHalbum is plainly one of the most lyrically incisive and enriching records of the band’s career to date. Inspired by real worldevents and the never-ending cycle of predatory capitalism that causes so much poverty, misery and death around the globe,songs like Dear Slum Landlord..., Metaphorically Screw You and Hierarchies are as uncompromising and vital on a conceptuallevel as they are in musical terms. As ever, Barney’s humanistic worldview blazes brightly throughout – a positive voice in awilderness of apathy and hate.

“I see the world as a see-saw,” he explains. “There are countries in the world that relentlessly consume and then there areother countries that are the fucking dumping ground, and the common perception is that they have less value. I don’t think thatway but it’s just a natural way to think for a lot of people. The event that sparked it, and even this passed a lot of people by,was the building that collapsed in Bangladesh last year, at a textile manufacturers. It was the dodgiest situation ever. The build-ing was already unsafe, there were huge cracks in the wall and they’d built extra storage on top, extra workshops, because thegreedy bosses wanted to increase their output, and then the whole building collapses. These clothing companies, in the main, itwas crocodile tears and nothing’s happened and to me that’s fucking shameful. People think that slavery is a thing of the past,but there are slave conditions all over the world, where people are working under threat of death. Slavery is far from gone. Iknow that it’s something I can’t change on my own, although I try to make the correct choices in my life, but I felt I wanted toraise the point a little bit and hopefully open people’s eyes.”

Adorned with some of the most gut-wrenching and distinctive artwork to grace an album in decades, Apex Predator – Easy Meatmay well be NAPALM DEATH’s definitive statement, both on the state of the world and the limitless possibilities of extrememusic. Right now, there is no other band with the brains and balls to make music this original, intelligent or downrightterrifying. It’s 2014, the world is fucked and we need NAPALM DEATH more than ever. 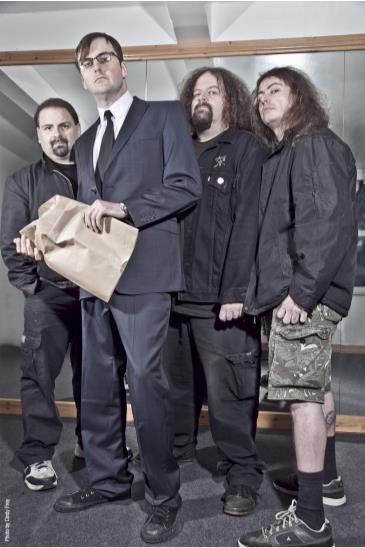