Michael Calfan, the new priority of the label Yellow Productions, discovered in 2008 by Bob Sinclar himself. Michael Calfan is a mix of talent, creativity and hard work, “it was long since I had not felt such good vibes with a young artist” dixit Bob Sinclar. After several releases both on Yellow Productions and Bob Sinclar Digital, the new digital label, Michael Calfan is working on his first album planned in 2011.
Many beautiful years have past between their first monster hit Give It Up and now. Born as first generation house producers, a complete musical revolution has taken place right in front of Zki & Dobres eyes: From the first simple sampler, to a complete digital studio built into a laptop.

DJ Zki & Dobre; who are they and what are they up to? Two simple but pressing questions which are not easy to answer. The Dutch producers Zki & Dobre- respectively René ter Horst and Gaston Steenkist are responsible for so many productions in all kinds of styles under so many different names that they are extremely difficult to categorize.

Their studio remains their favorite place, but as DJ’s, the clubs is where their music is being tested and where their music should be played out loud! Great examples are I Wanna Be U (2001), A Star Is Born (2003) and Always And Forever (2006) which they released under their alter ego Chocolate Puma. 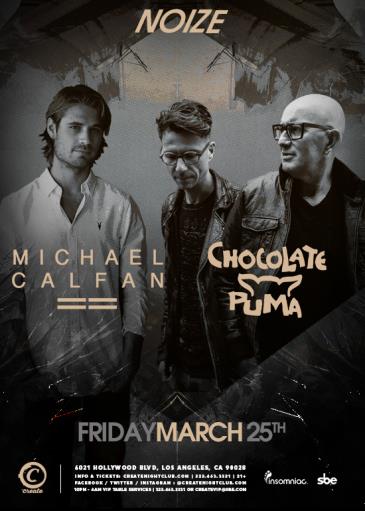