Muscadine Bloodline LIVE at The Lyric Oxford on August 25th! Tickets go on sale Friday, June 3rd at 12PM!
7PM: Doors. 8PM: James Tucker. 9PM: Muscadine Bloodline.
18+ unless accompanied by a parent or guardian ticket holder.
A $5 underage fee will be charged to all persons under the age of 21 at the door. CASH ONLY.
No Refunds.

STANDING ROOM ONLY. There are no SEATS.

ABOUT MUSCADINE BLOODLINE:
Proudly independent and unapologetically Southern, country duo Muscadine Bloodline foundtheir true voice on their latest album,Dispatch to 16thAve. Their sophomore record debuted atNo. 1 on the iTunes Country Chart, hit No.4 on the iTunes All Genre Chart and peaked at No.17 on the Billboard Chart. Lauded by Taste of Country, Rolling Stone, PEOPLE and Billboard,the duo's new music is the most authentic Muscadine Bloodline yet. Charlie Muncaster and GaryStanton grew up inMobile, Alabama, but didn’t cross paths until they each started to pursue theirmusical dreams. In 2012, they forged a friendship when Stanton opened a show for Muncaster’sband at Soul Kitchen in their hometown. Since naming themselves Muscadine Bloodlinein2015, the duo has charted three albums, sold-out shows across the country and played the GrandOle Opry multiple times, hailed often as the most successful independent duo in Country music.Their Southern roots carry over to their band name as well: Muscadine grapes grow in the Southwhile Bloodline represents their heritage. 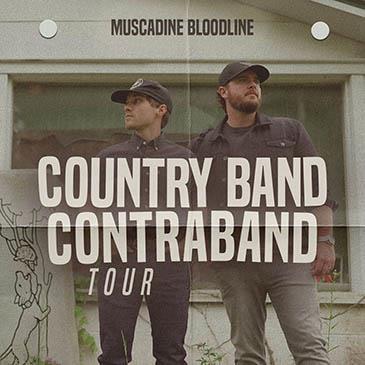