MURS: Over the course of “Murs 3:16” and “Murray’s Revenge,” Murs and 9th Wonder crafted two of the most enduring hip-hop albums of the last decade. Packed with warm, soulful tracks and the inimitable wisdom of Murs, it’s a complex collaboration that’s unusual to say the least. They are together again for the third time, on “Fornever".

A defining feature of “Fornever” is the panorama of guest rappers that appear alongside Murs on the tracks. Dogg Pound veteran Kurupt, stone-cold pimpin’ Suga Free and L.A. Latino OG Jacken from Psycho Realm are just some of the names on the list.

Zion I: are a hip hop duo from Oakland, California. The duo consists of producer (& DJ), Amplive, and Mc Zumbi. The group is known to its followers for Amp’s futuristic production techniques, using a mix of live instrumentation and samples, and Zumbi’s positive and socially conscious lyrics. Their debut album Mind Over Matter  was nominated for Independent Album of the Year by The Source Magazine in 2000. AmpLive’s futuristic production techniques and Zumbi’s strong and substantial lyrical content were a major hit with underground Hip Hop fans.

The Grouch is one of the founding members of the internationally infamous crew The Living Legends. Known for captivating his listeners with his down to earth and truthfully poignant raps and production, The Grouch has successfully released over ten solo projects, independently. In addition to his solo career, The Grouch has played an integral part in building the Living Legends brand, sound, and image.

ELIGH: A self-described “genre-breaking, obsessive bass fiend”, the Los Angeles native has chosen to fabricate projects that incorporate the gritty sounds of the UK dub scene, the unorthodox styling of indie rock, the lush guitars and honesty of folk music, and the complexity of jazz, all without losing the listener in a musically esoteric composition. As a producer, Eligh has provided music for notable acts such as Living Legends, Murs, Rass Kass, El-P, wrestler John Cena, and continues to be a sought after producer by his peers.

If you aren't familiar with Murs music visit his website at http://mursworld.com/

Text the word "CONCERTS" to 38714 for free Hawaii Concert info.

Special Thanks to our sponsors: 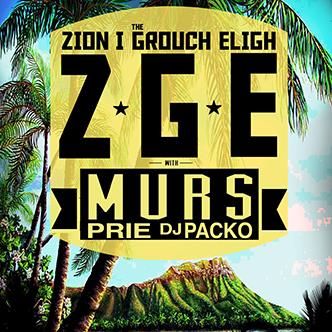