Special VIP food and wine two-top tables are available for purchase.  Please call Jesse Savio at 808.351.8200.
****************************************************************
From 1961 to 1971, Motown record label produced 110 Top 10 Billboard hits. Their repertoire of artists included Smokey Robinson, The Jackson 5, Stevie Wonder and Marvin Gay.  15 of Honolulu’s soul singers, including American Idol finalists DeAndre Brackensick and Big Mox, along with 2015 Hoku Award winner for best R&B album of the year, Maryanne Ito, Keilana Mokulehua, Smokestack, Riya Davis, Sherry Graham, Kahnma K, Forsseable Futures, Gyn Barnes, Jenna Keliikuli, Jarred Roberts, Candy Diaz, will make up a 10-piece SUPER BAND complete with keys, back-up vocalists, and a brass horn section, to pay tribute to this distinctly soulful and pop sound. They will be performing classic hits like “I Heard It Through The Grapevine,” “Be My Baby,” and “You’ve Really Got A Hold On Me.”  All proceeds for this year’s Motown Valentines will be donated directly to the Standing Rock Sioux Tribe with a minimum one thousand dollar donation made on the day this show is announced.
Original opening sets will be provided by Kings of Spade, Paula Fuga, Chicago’s Jennifer Hall, and funk/soul/hip-hop killers, The Bentos.
PAULA FUGA Praised for her originality in song composition and ability to stir the deepest emotions with spellbinding and soulful vocals, Paula Fuga was awarded the Na Hoku Hanohano Award for Most Promising Artist.  She has headlined the Alma Surf Festival in Sao Paolo, Brazil, and performed with Jack Johnson at Madison Square Garden and the Sydney Opera House Forecourt, while making musical collaborations with Jack, Ziggy Marley, & Nahko Bear.  She has even been invited to perform for President Barack Obama in the White House in Washington, DC three times.
KINGS OF SPADE is a high-energy, foot-stomping, shameless dancing Blues-Rock act from Hawaii.  The Kings are fronted by KC, who’s firey and passionate vocals cross between Janis Joplin and Aretha Franklin.  KOS have been featured at Willie K’s Blues Festival, Riki Rachtman’s Cathouse Anniversary, and on iconic stages like the Roxy Theater in Los Angeles all the way to the Stone Pony in New Jersey.  After 2 years of touring nationally as openers for King’s X, they will embark on their own headlining tour this upcoming April and their very first European tour in June.
Also performing will be Indie-Soul band from Chicago, JENNIFER HALL.   After a mind-blowing performance at the Republik last year, their Honolulu fan base has compounded exponentially.  Named an “artist to watch” by Chicagoist, Jennifer Hall’s powerful and sincere vocals combine influences such as Patsy Cline, Jeff Buckley, and Ella Fitzgerald.  After releasing a critically praised EP, Hall immediately embarked on a relentless North American tour while sharing stages with both Eddie Vedder and Tom Morrello. 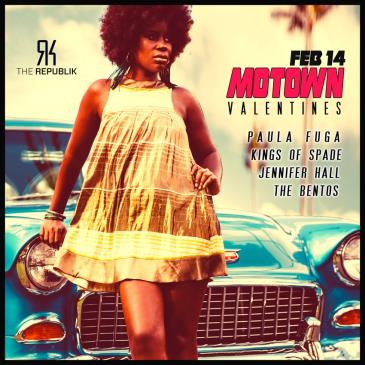