Tickets Available at the Door.

"The Long Island prog-metal band bursts with enthusiasm and rabid energy, as if Mastodon's apocalyptic visions were replaced with cosmic wonder."
–Pitchfork (2019)

“Moon Tooth walk that perfect line between metal and hard rock that is truly destructive.” -Kerrang! (2019)

“Arguably one of the most original metal bands out there right now... insane riffs, confusing rhythms and more catchiness than you're going to be able to stuff into your head to hum under your breath all day.” -Metal Injection (2019)

"Electrifying, bluesy, and highly original progressive metal... Walking the line between challenging and accessible... This is one of the best progressive records of the decade. Get on it."
–Invisible Oranges (2019)

"As with 'Chromaparagon' before it, 'Crux' is technically brilliant, with all musicians delivering intricate and meticulously played parts... Moon Tooth's stirring energy and optimism are incredibly infectious. Densely packed but never overdone, 'Crux' is an inspiring and uplifting distillation of modern rock."

"Razor-edged hard rock/metal that is as aggressive as it is memorable." –Nine Circles (2019)

“To say that Moon Tooth outdid themselves with Crux is an understatement. They managed to deepen their sound while simultaneously condensing it and making it more

accessible. It’s easy to see people who think that “rock n’ roll” died long ago listening to this and feeling rejuvenated.” -Heavy Blog Is Heavy (2019)

“This band is pouring everything they have into making a name for themselves and it shows on Crux. There’s not a single thing I dislike about these 43 minutes and I can’t stop listening to it.”-Toilet Ov Hell (2019)

“Looking into the blends of sounds they achieve is awe-inspiring, even more so when you consider it’s all achieved with relatively conventional means, no gimmicks needed. If you have a fetish for fun, and an ear for catchy melody that never relents, this is the album for you.” -Everything Is Noise (2019)

Moon Tooth began its journey at the end of 2012. Founding members Nick Lee and Ray Marte‘s previous band had dissolved and they quickly found a musical and philosophical kinship with singer John Carbone and bassist Vincent Romanelli. The band went straight to work writing and constantly gigging. They broke 100 shows in their first year with a relentless DIY ethos and quickly built a following with their intense and infamous live performances.

In July of 2013 they released the ‘Freaks’ EP; four songs and 14 minutes of urgent, frenetic energy. The EP was mixed and mastered by drummer Ray Marté at his own Westfall Recording Company and proved the band as a force to be reckoned with as both musicians and songwriters. The EP also won over attention from the metal press. MetalSucks described the band at the time as “an undeniably strange, totally kick-ass beast who don’t really fit into any one genre. Anyone whining about a lack of originality in modern metal needs to check these cats out.”

The band went on to steadily tour and build their following throughout 2014. In 2015 they started to see the results of their hard work. They were asked that year to play both the Metal Injection/MetalSucksCMJ showcase as well as their SXSW showcase. They saw rotation of songs from their ‘Freaks’ EP onSirius XM’s Liquid Metalwith no label or management behind them. The band also found themselves sharing stages with bands as notable and diverse as Killswitch Engage, The Dillinger Escape Plan, GWAR, Mutoid Man, Weedeater, Veil of Maya, Cancer Bats, KEN Mode, He Is Legend, & King Parrot.

The critical reaction to ‘Chromaparagon’ was overwhelmingly positive:

“Unbridled turbulence. Dexterous metal riffing. Soulful vocals over layers of melodies and shifting rhythms. Moon Tooth’s unique beast of a sound is forged from seemingly disparate elements, and the quartet unleashes it with the kind of intensity and surgical accuracy typically reserved for extreme metal bands.”

"Like Mastodon f*cking Living Colour while Gojira watches... Long Island quartet Moon Tooth is on a level of their own. On their debut full-length Chromaparagon, the band deals in an aggressive and progressive form of extremely hard rock that tiptoes into groove-metal but isn't afraid to open up into widescreen choruses."

"They're heavy, they're melodic, they're intimidatingly skilled musicians, they're great songwriters, and holy shit, wait 'til you see them live."
–MetalSucks

"Moon Tooth leads the wolfpack... with shred. Nick [Lee] plays the guitar like his fingers are trapeze artists..."
–Gear Gods

"Technical, melodic, and shreddy without being wanky... The band's bio compares vocalist John Carbone's voice to Jeff Buckley, and he certainly has one hell of a range." –Metal Insider

"Each unexpected punch to your eardrums feels not only satisfying but also authentic... The passion in these recordings is palpable."
–Heavy Blog Is Heavy

"This band rocks a flawless show with so much style I can’t help but grin ear to ear while watching them do their thing. They’re incredibly fun, super talented, and excellent song writers..." - METAL INJECTION

Between the release of ‘Chromaparagon’in February 2016 and its first anniversary in February 2017 Moon Tooth had done over 130 shows with some highly notable acts, making for over 400 shows total in their career thus far.

Moon Tooth supported Intronaut& Entheoson a full US tour in July & August 2016. They supported Toothgrinder & Aurason a US tour in October 2016. They were direct support to Thank You Scientiston a tour of the US & Canada in December 2016. They co-headlined a tour with Astronoid in February 2017 in the US & Canada and supported Fit For An Autopsy & Tombson another full US run in June & July of 2017. They closed out the year with a full-US headlining tour of their own in November 2017.

The band was invited to record their own Audiotree Live Sessionin October of 2016 and they released a cover of Jimi Hendrix’s “Manic Depression” in January of 2017.

While touring with Fit For An Autopsy, Moon Tooth gained the attention of renown record producer Machine (Lamb of God, Clutch, King Crimson, Everytime I Die...). The producer was so intrigued by the potential in the band’s blend of heavy, progressive riffs and melodic, soulful vocals that he reached out to the band directly. He and the band, who had all grown up as fans of Machine’s work, immediately started making plans to work together. Machine enlisted the help of Lamb of God’s Mark Mortonfor pre-production to truly make it a unique and explorative experience for everyone involved. The duo of producers brought a new level of focus to the process. Machine & Mark guided the material just enough to bring out the best of the band without taking

anything away from the sound they had cultivated over years of writing, recording, and touring together.

The band spent the last week of 2017 at Mark’s home in Richmond, VA sculpting the raw material that would become their second full-length LP ‘Crux’. The word “Crux” is defined as the “decisive or most difficult point of an issue.” The album ‘Crux’ tells the story of the band at this crucial point where the past must die so new life can begin.

‘Crux’ was released March 29th, 2019 to rave reviews and not only saw the band quickly land tours with the likes of Mark Morton, Animals As Leaders, &The Contortionist, plus 100,000+ streams in the first week, but also their first Billboard charts: #13 Heatseekers, #23 Hard Music, #42 Indie Label, #62 Digital Albums,and more!

With a relentless work ethic, new music in the works, and an insatiable appetite for the stage Moon Tooth shows no sign of slowing down! 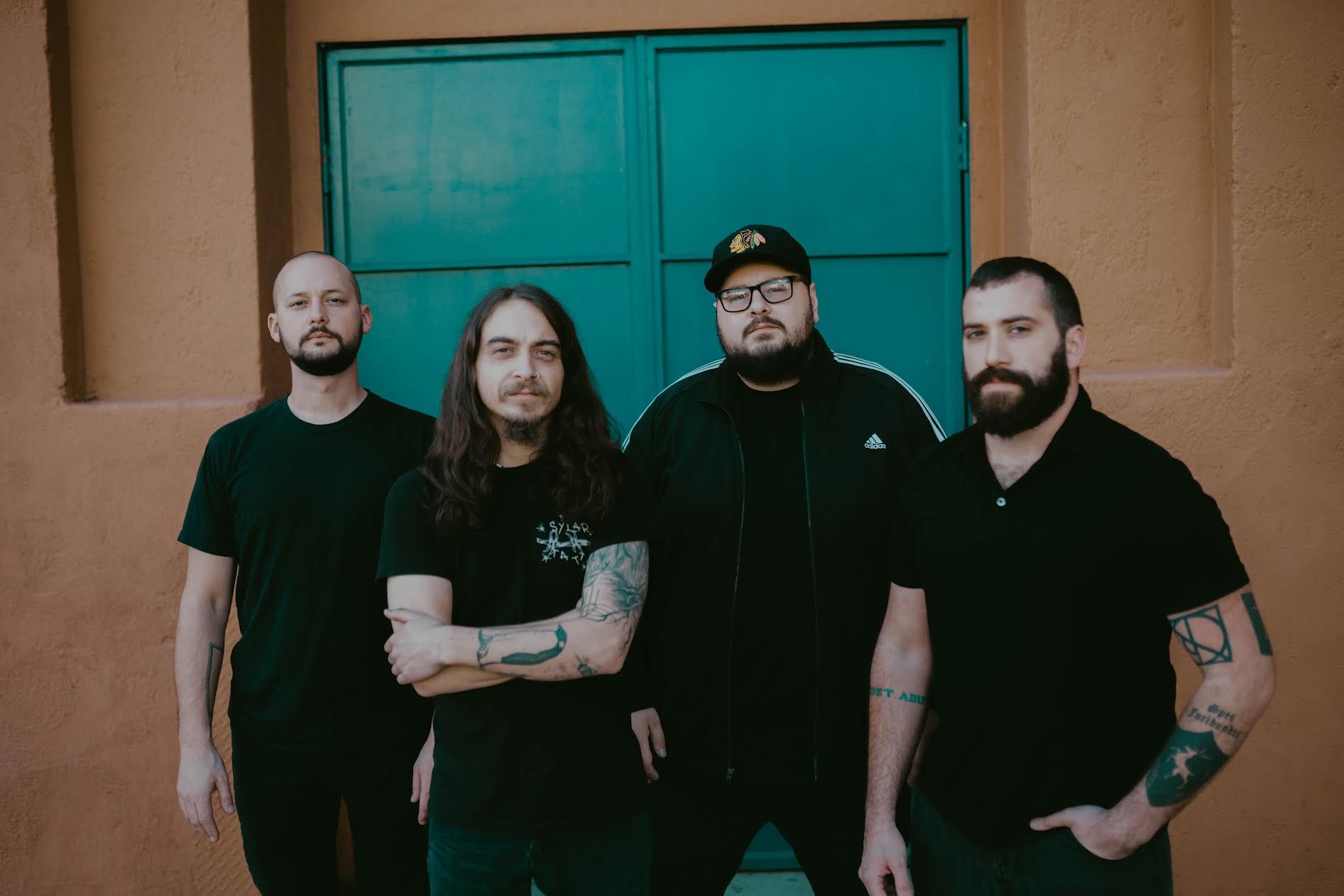