Minnesota at the OKC Farmers Market

Minnesota is one of the most innovative and proficient electronic producers to come out of the West Coast bass music movement. His sound breaks aways from the various subgenres of EDM but holds onto origins of dubstep and hip-hop, creating a truly authentic experience for his audience. Early on in his career Minnesota said, “My goal is to make bass heavy dubstep/glitch-hop music that’ll get you dancing, but it is not the same old three note transformer step… I try to focus more on the melodic side of dubstep, and hopefully, make quality songwriting a more relevant factor in the genre.” For the past four years Minnesota has followed through on his word and designed smooth, melodic, uplifting sounds, which fans have celebrated nationwide.

Originally from Minneapolis, MN, Christian Bauhofer moved to Santa Cruz, CA when he was 18 years old. Fresh out of the Midwest, his newfound California friends gave him the nickname ‘Minnesota,’ and unknowingly created his soon-to-be party crushing alter ego. He learned the guitar at age 12 and made numerous attempts to form a band, but it wasn’t until he attended Symbiosis Gathering for the first time in 2009 that his career in music became clear. The festival drew him into the emerging EDM culture with performances by Bassnectar, Pretty Lights and the Glitch Mob. Shortly after Symbiosis, Minnesota purchased Ableton Live and his first midi controller, and within a few months was making hip-hop remixes that his friends couldn’t stop playing. Around the same time, Minnesota teamed up with a couple friends and started a production company called Vital SC (now Vital Events). The company had a successful start, hosting a string shows around the Bay Area with big name artists. But Minnesota eventually split off from the promoting side of the industry in pursuit of his musical career—and today he couldn’t be happier with his decision.

Minnesota’s first EP, Panda Snatching Tycoon, came out on Tycho Records in January 2011. It received critical acclaim from a national audience, prompting Minnesota to drop his second official album, Ancient Machines EP, just months after. Released on Mal Label, Ancient Machines hit number nine on the Addictech.com best seller’s list for 2011 and every track appeared on the Beatport.com glitch-hop charts. During this time, Minnesota also managed to put out a free EP with MartyParty called Ultraviolet Halo that was released in July 2011. His fourth EP, Astral Projection, came out the following year and showcased his affinity for downtempo melodic ethereal sounds, which diversified his fan-base through hits like “Stardust,” and “Relax.” Minnesota’s fifth album, Altered States EP, has since been his most popular with tracks being played by DJs across the country. He describes the album as, “big room, melodic bangers,” with some, “faster tempo hip hop influenced stuff on it.” Minnesota’s most recent release Voyager EP resonates as a culmination of these projects, balancing his identifiable melodic synths with the bounce of 808’s. The album, fine-tuned with experience and precision, plays naturally in the evolution of Minnesota’s signature sound.

Now in his fourth year of touring, Minnesota has traveled to over 50 cities and performed at nearly every major festival nationwide. Last year he headlined his first two tours, and performed with the likes of STS9, Big Gigantic, MiMOSA and Gramatik. His music has been lauded by the likes of Bassnectar, Adventure Club, Paper Diamond and many others in his genre. Discussing Minnesota’s track “Push It,” Bassnectar once commented, “[It’s] quickly becoming a staple in my sets,” and “perfect for when I need a track that is epic and churning but also melodically hyped.” The support of Minnesota’s management team, agency, and some of the world’s greatest artists can only attribute to his hunger for more time spent on the road and in the studio. To those that haven’t had the opportunity to see Minnesota perform, make sure to be on the lookout for the next time he rolls into your city. To put it lightly, Minnesota is a name to watch. 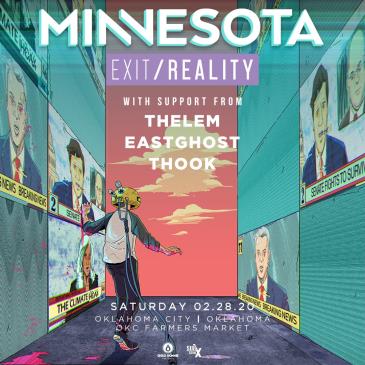