The German-born guitarist is the former lead guitar for the popular 1970s band UFO. He rose to fame early as a member of the Scorpions, debuting on their album Lonesome Crow at the age of 17. After going on tour as the opening act for the UK’s UFO, Schenker was offered the lead guitar role for the band in the mid-1970s and recorded eight studio albums with the group during his tenure. The rock metal artist is also known for his prominent solo career with his band Michael Schenker Group (MSG).

In 2012, Schenker received the Rock Guitar Legend award at the Vegas Rocks! Magazine Music Awards. “Guitar World” magazine also listed him as one of the 100 Greatest Heavy Metal Guitarists. 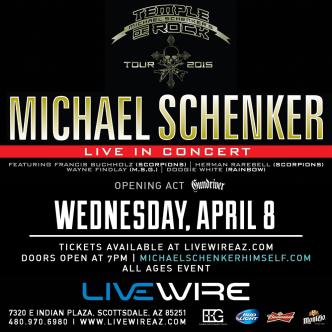