Heralded as “a leading light of the New York bluegrass scene” by the New York Times, Grammy-nominated guitarist and singer Michael Daves has garnered attention for his work with Chris Thile, Steve Martin, Tony Trischka, and Rosanne Cash in addition to his solo performances.

Described as “one of the greatest improvising violinists in America today” by virtuoso mandolinist/composer Mike Marshall, Alex Hargreaves is a fiddler who draws inspiration from a wide variety of genres and traditions. Based in Brooklyn, NY, Alex has toured with Jerry Douglas, David Grisman, Bela Fleck, Danilo Perez, Sarah Jarosz and has performed with many others including Billy Strings, Punch Brothers, Sierra Hull, Steve Martin and Kacey Musgraves, appearing on her Saturday Night Live debut. He was a member of the Grammy award-winning Turtle Island Quartet from 2016–2019, appearing on their 2018 release, Bird’s Eye View, and can often be heard playing in the house band on the public radio variety show, Live From Here with Chris Thile. 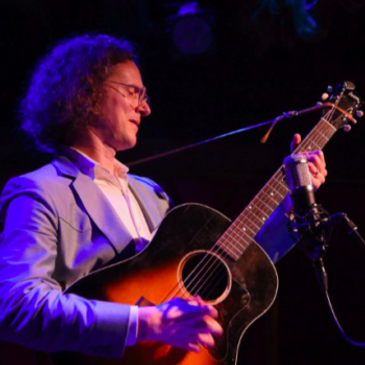