Megan Slankard & The Wreckage | The Sam Chase & The Untraditional

Megan packed 2018 and 2019 with over 10 months of touring, including a 50-show Guitar Center tour with BOSE Professional, a bio-coastal songwriter tour with Nashville's Alex Wong, and a 30 date, cross-country tour with Toad the Wet Sprocket.

THE SAM CHASEThe Sam Chase & The Untraditional hails from San Francisco, California. This juggernaut of a band blends rock n roll with folk music while maintaining the sensibilities and attitudes that come from growing up on a healthy diet of punk rock.


​The leader of the band is The Sam Chase himself, a natural storyteller with a voice that sounds as if it has weathered many an epic tale.  With boot stomping orchestration and lyrics that have been immortalized on the tattooed skin of their fans, The Sam Chase & The Untraditional doesn’t mess around.


These are the warriors we need in these troubled times. 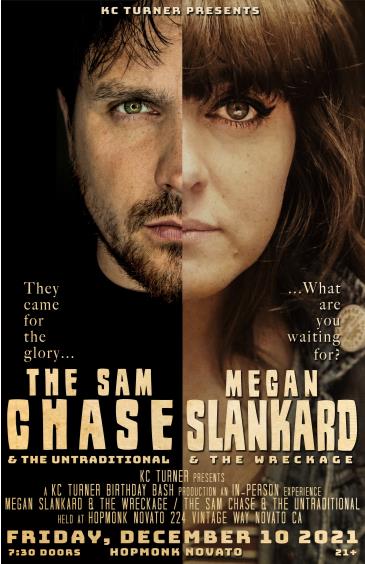 Megan Slankard / & The Wreckage / The Sam Chase / & The Untraditional