All advance tickets for this show have sold. Tickets will be available at the door and early arrival is strongly suggested. Table service is also available, please email VIP@avalonhollywood.com to reserve.

On September 2nd, Avalon Hollywood proudly welcomes back German-American DJ, music producer, and Coldharbour Recordings boss Markus Schulz back to the stage for an open-to-close set.

As one of the biggest DJs known to the Trance world of electronic dance music, Schulz is a power player when it comes to performing at some of the biggest venues and festivals around the world, such as the biggest indoor trance music event in Middle and Eastern Europe, located in Czech Republic. Along with performing all over the world, Schulz is widely known for his weekly radio show titled Global DJ Broadcast that features a variety of famous dance music artists in addition to those he manages on his record label, Coldharbour Recordings and Schulz Music Group. Schulz also has six studio albums under his belt and is half of the dance music duo New World Punx that Schulz formed with Dutch DJ and record producer, Ferry Corsten.

A name well known to those that love all things Trance, AVALON is ecstatic to welcome Markus Schulz back to the stage. 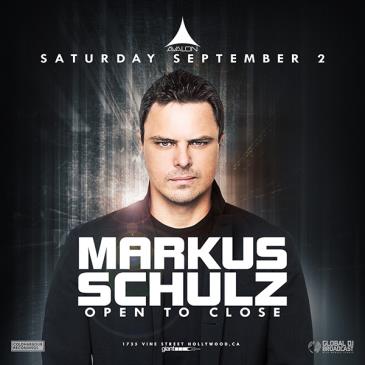