“I chose to go full time on this road 25 years ago. It’s been a spiritual quest, an amazing trip, at turns heartbreaking & transcendent. In that time I’ve made 9 solo records, 4 records with The Mighty Mystiqueros, 1 with my wife Tina, and there’s a new live record with my friend Kevin Welch.  I’ve had 100 or more songs recorded by other artists, traveled a fair part of the world, and had some very, very large times.  I have these anchors:  Wednesdays with my brothers The Mystiqueros at The Saxon Pub in Austin, the 1st Sunday of every month at Luckenbach, The Red River Songwriters Festival on the last weekend of January in the mountains of northern New Mexico, and Waltstock & Barrel, a Texas wine, beer & music festival near Fredericksburg on the 1st weekend of April. I move around a lot.”  - Walt Wilkins

A near constant presence on the Texas Music Chart since its inception as a songwriter, producer, singer, guitar player and artist, Wilkins spent a solid decade in the Nashville Country Music business trenches, writing songs he wanted to be recorded by artists he admired. There are indeed some noteworthy cuts: “Seven Hillsides,” by Ricky Skaggs, on a record that won a bluegrass-gospel Grammy. “I didn’t even know there was a genre called ‘bluegrass gospel,” Wilkins laughs, “but I loved his recording of the song, and my grandmother would have loved the connection to a gospel Grammy.”

Ty Herndon, during his heyday, made “Big Hopes” the title of his 3rd album for Sony, and there have been roughly a dozen other songs on major-label records. But it was Pat Green’s recordings of several songs that made Wilkins’ name known in Texas including: Poetry, Eden’s Gate, Wrapped, Carry On, We've All Got Our Reasons among others.

“God Bless Pat,” Walt says. “I never want to take Pat’s influence on my life for granted. He was a very early champion of my writing, and I have generally like his versions of my songs more than my own. And I know I have him to thank for getting some folks out to hear me play, and buying my records. I remain a fan of Pat’s songs, voice, and personality. And his killer band - their recording of ‘Ruby’s Two Sad Daughters’ is really beautiful.”

Wilkins’ work has been likened to the greatest and most timeless of the Texas/American troubadours: Guy Clark, Townes Van Zandt, and Kevin Welch among others. But it’s the John Steinbeck comparison that means the most. “It was in a review of ‘Fire, Honey & Angels,’ in Country Standard Time. That’s a remark to keep close.” Wilkins says. “I have written poetry since I was in grade school, and songs for over twenty years now. It means an awful lot to be mentioned in the same sentence as someone with as much gravity as Steinbeck… I do try to take my given work in the world seriously, and try not to shy away from the heavy subjects in life: commitment, faith, death.”

"Marc Douglas Berardo writes songs that are witty without being superficial, intelligent without being ponderous, fun without being silly. He performs them with an infectious verve. On top of that, he doesn't seem to have the slightest idea of just how good he is."  - David Olney, Legendary American Songwriter and Americana Pioneer, Nashville, TN.

“Marc is my kind of songwriter: thoughtful but not overwrought, smart but not overly clever. Great language. He can get to the point, and he tells a good story. He’s got a Big, open heart for characters, and real people Trying to make it in this world. His songs often have cool surprises. He is a performer of the first order.” Walt Wilkins, Walt Wilkins and The Mystiqueros

No Depression Magazine called his latest CD Whalebone: “a highly polished personal collection with songs that are on the delicate trapeze of poignancy.”

In May of 2014, Berardo won the 2014 Wildflower Art and Music Festival Song Contest in Texas. The following week he performed as a finalist in the legendary Kerrville New Folk Contest at the Kerrville Folk Festival.

In early 2015, Berardo's interview and live performance feature on Sirius/ XM Satellite Radio's The Village was voted one of the best of the year by listeners. Marc Douglas Berardo has shared the stage with heavyweights such as The New Riders of The Purple Sage, The Doobie Brothers, Jimmy LaFave, Martin Sexton, Terri Hendrix, Kevin Welch, Red Molly, Eric Taylor, The Pousette-Dart Band, John Haitt, and Livingston Taylor.

About his music, Marc says “... I try to write about people and situations that interest and entertain me. Subjects and places that I feel a connection with and that are unique in a quiet way. Real people and places caught in the moment, almost like a documentary film or a novel), and there have been roughly a dozen other songs on major-label records. 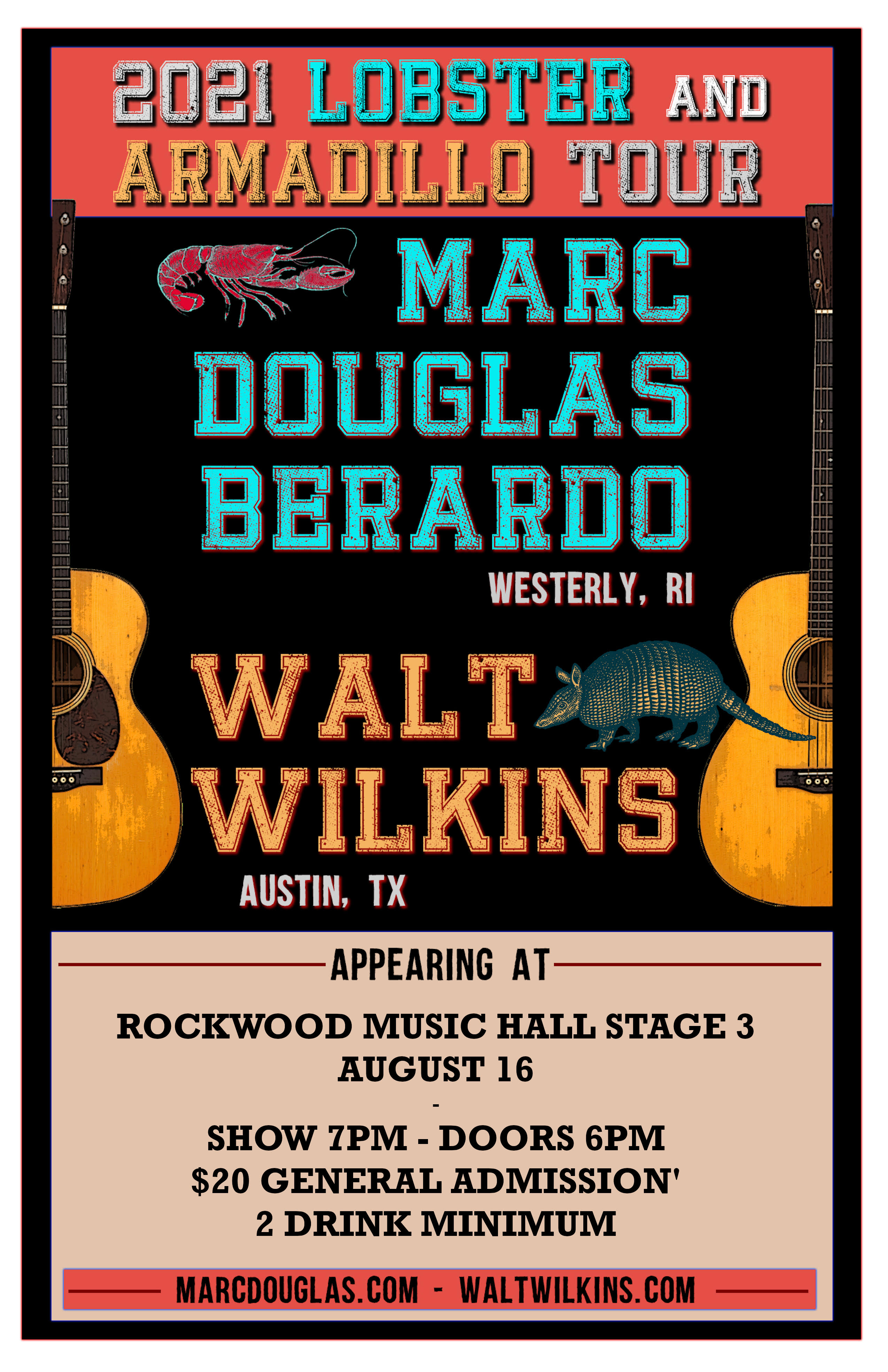