2 drink min/person, we are 21+ w Valid ID*
*FOREIGN ID must also have PASSPORT, per CA STATE LAW
- Lineups are subject to change
- No Heckling

A veteran Stand Up Comedy Series for military veterans by military veterans. “Mandatory Fun” is one of the first comedy specials to showcase the dark and irreverent humor that military service cultivates and thrives on.
You have officially been volun-told to report to The Comedy Store Wednesday March 11th, 7:30 pm to see the entire cast from season one celebrate the premier of “Mandatory Fun” on VetTV; with a one night only standup comedy showcase guaranteed to destroy good order & discipline, and fully restore morale. Watch as comics: Ron Ripley, James Hancock III, Jeff Bilodeau, T.D. Cunningham, Mike Vinn, Jessica Wellington, and Mitch Burrow show you how deep their psychological damage actually goes.
VetTV is proud to announce that they are excited to receive more veteran comedian submissions for follow-on seasons of ”Mandatory Fun”. Follow VetTV on Instagram at https://instagram.com/vet_tv?igshid=1u0whec6jk8dx for further information on submissions.

Check it out here!
https://www.veterantv.tv/

About VetTV:
VetTV is a television streaming network service that uses the most realistic, offensive, hilarious, and  irreverent comedy to recreate the post 9/11 military veteran experience. Everything VetTV does is grounded in the same intention, which is: to use humor and camaraderie to bring veterans together, to heal the mental wounds of war, and to prevent veteran suicide. 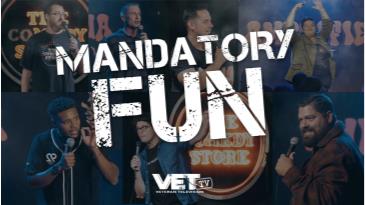 Show Map
View 916 Pearl St in a larger map
We use cookies to provide you with the best experience possible. By using See Tickets, you accept our cookie policy.
Accept
ftr1:0