Maddie Marlow and Taylor Dye never intended to hit a nerve when they sat down on St. Patricks Day and wrote “Girl In A Country Song.” Merely expressing their own reaction to the reductive tilt of today’s BroCountry, the pair and co-writer Aaron Schwerz shamelessly skewered its Xeroxed stereotypes; “Girl” was as much a lark as it was ever “meaningful social commentary.”

Yet the response was so instant and intense, there was no denying it. NPR’s “All Things Considered” cited Maddie & Tae for “turning heads in different ways with their very first single,” Rolling Stone cited them as one of “10 New Artists You Need to Know” and David Letterman couldn’t get the plucky duo to New York fast enough. Even elevated cultural think-tank The Atlantic marveled, “Cheekily appropriating much of the sound of modern country, the two young women directly quote well-known bro-country lyrics and titles...”

No one was more surprised than the natives of Sugar Land, Texas and Ada, Oklahoma. Still in the studio tracking overdubs for “Girl,” they signed their record deal before Dan Huff had even finished four sides on the sunshine’n’moxie pair.

“We wanted to go at it from a girl’s perspective, and we wanted to put ourselves in the shoes of this girl,” says Dye. “You know, how does she feel wearing those cut-off shorts, sitting on the tailgate?”

“Boys, we love you, we want to look good, but it’s not all we’re good for,” Marlow cautions with a laugh.  “We are girls with something to say. We were brought up to know how we should be treated.”

Simple as that. But there’s so much more to Maddie & Tae than the song that is either a feminist declaration, an echo of Janet Jackson’s rebuke “I’ve got a name, and it ain’t ‘Baby’,” or this year’s feel-good finger-wag to dumb boys. NPR’s lead pop critic Ann Powers agrees, “Maddie and Tae are more. They’re songwriters, powerful harmonizers, and in the video for ‘Girl In A Country Song,’ natural comediennes.”

One listen to their self-titled EP shows that. The reeling mean-girl send-up “Sierra,” with its bending steel and trotting acoustic guitar, boasts harmonies that turn in on each other and the kind of truth that’s hilarious and straight-up.

“There was this beauty-queen bully from high school who sent my friends and I home in tears plenty of times,” Marlow explains. “In order to get over it, I had to write a song. So I brought the idea of ‘Sierra,’ and started singing, ‘I wish I had something nice to say...’

“Tae and our co-writer Aaron Scherz lit up and ran with it.”

Any one who’s suffered through and survived high school can relate. But the ability to rhyme “Sierra, Sierra, life ain’t all tiaras...” and taking the rejoinder “you’re gonna find out karma’s a...” to the brink is what sets these two late teenagers apart.

Effervescent and savoring every moment, Maddie & Tae laugh when they lean into the cautionary “That high horse you’re riding... can buck you off clean,” then let their harmonies swoop free and high on the outro.

Like a lot of young women, Maddie & Tae grew up on the Dixie Chicks’ full-tilt acoustica. Both dreamers who knew what they wanted early, the pair met at 15 through their vocal coach and came to Nashville for “a summer camp publishing deal.” They met Big Machine’s SVP of A&R Allison Jones – and fate stepped in.

As Tae recalls, “She said, ‘If you really want to pursue this, you will need to move to Nashville.’ I knew that was what I wanted, but moving to Nashville also meant I had to figure out how to graduate from high school early, and Maddie had to turn down college.”

In 2013, it was decided. The pair relocated – and never looked back. Publishing deal in hand, they were immersed in creativity, seeking a voice that was both authentic and truly their own. Like Taylor Swift, the duo knew by speaking their truth, their uniqueness would set them apart.

As Marlow told Rolling Stone Country, “Our whole project revolves around keeping it real and being honest. We didn’t filter anything, because we felt like when it comes from an honest place, the truth will resonate so much better. The thing about Taylor, everything is real and relevant to what she’s going through, and that’s why people connect with her.”

Listening to the double harmonies over an acoustic guitar hope-strung-over-doubt mid-tempo “Fly,” Maddie & Tae’s conviction is evident. Will what’s been built be betrayed? How do you keep the faith when you’re so unsure? Where is the courage to maintain your place when you’re afraid of the outcome?

Not since “Wide Open Spaces” has an act embraced the will to grow so unabashedly. In perfect synchronization, Maddie & Tae sing, “Keep on climbing, though the ground might shake, keep on reaching through the limb might break/ we’ve come this far, don’t be scared now ‘Cause you can’t learn to fly on the way down...”

It’s the sort of song that empowers people wherever they are in life, whatever challenge they may be encountering. Yes, it is about coming of age, but it’s also facing the things that scare you – and having the faith to transcend.

“’Fly’ hits home every time we listen to it,” Dye offers. “We really wanted to write a song that was, ‘You may not have anything figured out, but it doesn’t matter.’”

Indeed. Townes Van Zant wrote, “To live is to fly...” For Maddie & Tae, their wings are in the music. What they feel, how they live, what they dream – this is where they rise. One need only listen to the tumbledown hoedown “Your Side of Town,” that’s all high jinx and higher spirits as they pair warn off a no-good man for the last time, to understand.

Even in the hardcore throw-down, all bucking backbeat and bee-sting guitar, there is a romp and a plucky audacity that shows these young ladies have no interest in letting anything break their spirits. Just as importantly, they fear no fiddles, no banjos, no steel guitars, even as they have bulked up drums that crash and guitars that slash and sting like the big boys.

While Rolling Stone observed, “Cheekily appropriating much of the sound of modern country,” there is so much more to Maddie & Tae than that. Independent thinkers, strong livers, hardcore dreamers, the pair are reaching for the sky – and winking at us all while they do it.

Sometimes, it’s the freshest faces and brightest sounds that pull us in. For Maddie & Tae, who embrace real country, it’s that merge of what’s right now and what they love that sets them apart/captures our imaginations in the best possible way. 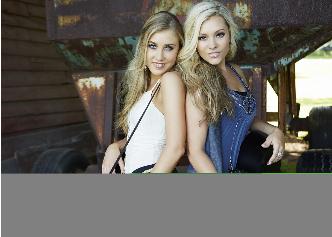