MORGAN PAGE
Versatility remains the key to longevity. Any artist must be able to deliver regardless of the setting, whether it's in the studio or on stage. For Morgan Page, it doesn't matter where he is. His number one concern is sharing quality music. As an artist, DJ, songwriter, and even radio show presenter, he continually offers a unique and undeniable perspective, evolving with the times. No matter what he's working on, he delivers for the audience.

Page has become a seismic presence at festivals such as Coachella, Electric Daisy Carnival, Big Day Out, and many more worldwide events. In 2012, he was nominated by the IDMA's in the "Best American DJ" category alongside Skrillex, Kaskade, and Deadmau5. Two Grammy Award nominations are credited to his name, and his 2011 full-length album, In The Air, debuted at #1 on Beatport's "Top 100 Albums" Chart and #6 on Billboard's Heatseeker's Chart, while the single reached #1 on the Billboard Hot Dance Airplay Chart and resided in the Top 10 for a staggering 25 weeks. With all this along with sales figures that put him over 600,000 digital track sales and YouTube views that surpass 19 million, it's no wonder the Wynn Las Vegas tapped him for a prestigious residency in 2012 and Sirius XM gave him his very own radio show—aptly titled "In The Air" (on its 162nd episode and counting.) Even with all of this, he shows absolutely no signs of stopping. As a veritable tastemaker, this trailblazer is now taking EDM to new places altogether.
Welcome to the age of Morgan Page…

Instead of covering the same ground, Morgan has decided to chart a new course altogether in 2013. With new singles and an exhaustive Fall tour complete with companion compilation on deck, there is no question Page is ushering in this period on his terms.

When speaking of his new music, Page declares, "We're releasing music in a different way from now on. There will be multiple singles before the full album drops." He goes on to say, "It's inspiring to play something new in front of a big crowd and see the reaction. The crowd is very much part of the creative process. I pick the best songs and let the audience live with them. With the new material, I'm trying to make music that is familiar, but still has its own edge and identity."

For his first post "In the Air" release, Morgan took the eighties staple "Your Love" from The Outfield and infused it with kinetic 21st century energy, reinterpreting it for a new generation. "I wanted to give it a modern twist to this classic. It's just a great universal pop song." When Page reached out for their permission, the band upped the ante and responded with re-recorded vocals. "Once I worked [the vocals] in with my production, it kicked the song into 2013." 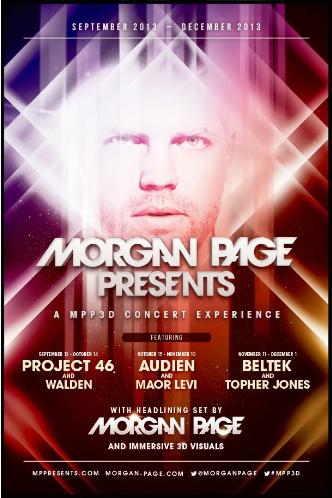