Angela Flores, better known as Luna Aura, a singer-songwriter based in Phoenix with a growing presence in the pop genre. Aura’s sound is heavily influenced by hip-hop and trap beats but also relies on indie and Top 40 elements. Her unique and galactic musical style combined with her profound lyrics of self-discovery and empowerment have garnered a great deal of recognition, such as an Indie Spotlight on Broadcast Music, Inc. Aura has landed major performances all around the Valley, including Tempe’s Summer Ends Music Festival last year. Her self-titled debut EP was released in 2014 and has been featured on MTV and VH1. 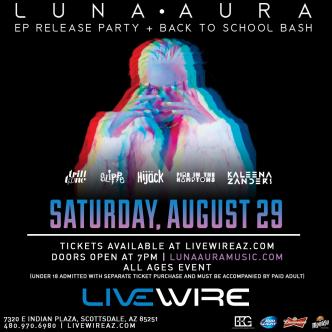