Watching Luke Combs give his all duringa sweaty, jam-packed show in Nashvillefor rowdy fans and radio power-players is to understand why he's come so far, so quickly.Both onstage in front of thousandsor alone in a room with his guitar,the North Carolina singer-songwriter knows who he is, where he comes from and where he wants to go. And on his debut album for River House Artists/Columbia Nashville, This One's for You, he invites listeners to share in his remarkable journey.

Like its title suggests,the album is a sincere offering of thanks: to his mom and dad who gave him his first guitar; to the friendswho made up his first band; and especially to the fans who supportedhim since his humble days singingin restaurants in Boone,North Carolina. It was those very gigs, nightly three-hour marathons at eateries around the college town, that taughtLuke how to grab – and hold – the attention of his audience.

"My strategy was if I could sing my ass off on cover songs like Skynyrd's 'Simple Man,' that'd get people to put their food down for a minute.Then I'd play an original song right after that and I'd have them," says Luke.

The shrewd idea worked, and soon the young artist with a knack for crafting imagery-rich, real-life songs was buildinga solid fan base, one that would follow him to bars throughout North Carolinaor online via the viral YouTube and Vine performance videos heposted. Aware that he was capturinglightning in a bottle, he assembledsome of his most popular tracks for a series of successful EPs and, with their impressive sales, was able to financea move to Nashville.

Luke, whowas working two "mega brutal" jobs, at a go-kart track and at an outletstore, gave his notice and split."I quit my jobs and haven't had one since," he says "That was 'making it' to me."

But the ballcap-and-boots singer is sellinghimself short, because the exceptional This One's for You andits hit single "Hurricane" portend much more is to come.

Acollection of 12 songsall written by Luke,often with frequentcollaborators Ray Fulcher and James McNair,This One's for You paints the most relatableof pictures. Songs like the driving "Hurricane" and the cautionary "One Number Away" capture the essenceof heartbreak and bad decisions, while the winking "When It Rains It Pours" and boozy "Beer Can" celebrate life's little victories. In every song on the album, there's at least one lyric that will elicita knowing "I've been there" from fans.

And that's the other secretto Luke's grass-roots success. His fans see themselves reflectedin both his songs and his everyguy demeanor. Just like them, he busts his back so he can appreciate even the smallest of luxuries.

"I'm a guy you can go have a beer with and notworry that I'm gonna talk about Maseratis and exotic vacations," he laughs, exuding a refreshing innocence. "Iwould love to go to the Cayman Islandsas much as the next guy, but I don't evenhave a passport. I had never been on a plane until I was 25. So the fans see I'm a lot like them. They see I'm working hard – especially with my songs. Ididn't just go pick out a bunch of songs that I thoughtpeople would relate to."

Instead, he lived them and harnessed those experiences for his lyrics. In the moody,vulnerable "One Number Away," he's tempted with dialing those forbidden digits. "How many people have ever had too much todrink and picked up their cellphone and called someonethey shouldn't have?" he asks. "Everyone has done that."

Likewise, everyonehas cringed when they have unexpectedly bumped into their ex at a bar. Which is why "Hurricane" was such abreakthrough for Luke: he captured that universal awkwardness perfectly, not in a ballad, but in a roof-raising sing- along that has become a cornerstone of his concerts.

But even Luke will tell you that his best songs are the ones that bustcommon phraseswide open. In "Don't Tempt Me," he dares you to show him a good time; "Be CarefulWhat You WishFor" lamentsthe things he no longerhas; and in "IGot Away With You," he delivers amanly love song about making off with his lady's heart.

It's the Ninetiescountry homage "When It Rains It Pours," however, that best shows off Luke'sway with words, as he celebrates a deluge of good fortuneafter a breakup.It's an exceptionally thought-out song, with lyricsthat eschew the abstract for the concrete.A winning scratch-off ticket, a waitress's number on the back of a check and a used four-wheeler all figure into the narrative.

"It remindsme of a Brad Paisley song, when he does those really cheeky, clever songs like 'I'm Gonna Miss Her,'" says Luke. "I'm influenced a lot by the smart lyrics of Paisley and especially Eric Church.I love writing about old sayings and colloquialisms and flippingthem upside-down."

Luke does likewise with"This One's for You," the album'stitle track and its high- water mark.While its title may hint at a beer-drinking anthem,it's actually a love note to the ones who'vesupported him along the way. "There are a couplepeople that I owe a beer to / and three orfour I owe morethan a few,"he sings in the openingline.

"My friends,the guys in my band and my parents helped me through so much and were alwaysvery encouraging. That's where this song was born from and why it's very specialto me," he says."I named thealbum that because it sums up my whole life."

In the end, This One's for You, produced by Scott Moffatt,showcases a singerand writer unafraidto tell his story without pretension or from behind a false front. In a genre that throwsaround words like "genuine" and "real" with abandon, few artists so earn those adjectives like Luke. He is thewalking, writing and singingembodiment of three chords and the truth.

"There's no smoke and mirrors with me. There was never any point where I picked up the guitar and said, 'Iwant to be a countrysinger.' I just wrotesongs and they were countrysongs," he says."Now I get to live my life writing and playing for peoplearound the country. What a cool thing, right?" 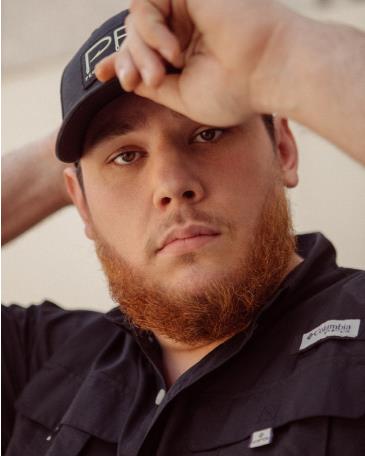