Nicole Atkins put out one of the best summertime records of 2020. Italian Icewas like a postcard from the Jersey Shore in the 1970s -full of warmth, vivid color and a tilt-a-whirl variety of musical grooves wrapped around Atkins' wonder of a voice. You'd be forgiven if you missed it, as there was a bit of competition from world events. But now there's a second helping served up in Memphis Ice, a cabaret deluxe style reimagining of the songs.“Italian Icewas one of the first feel-goodrecords that I've made,” Atkins says, “and people needed to feel good last year. But of course, like everybody else, I couldn't go out and play it live.”Resilient and resourceful, Atkins started hosting a variety show from her attic, distributed through Patreon. It was so well-received that Amazon soon picked it up and funded more expansive episodes, shot at Asbury Park's Paramount Theater,and featuring special guests like Ween and Kurt Vile. Atkins says, “Initially, I thought, 'We've got to figure out a way to keep playing, make some money and give ourselves something to look forward to.' But the variety show ended up saving our lives.”It also reminded Atkins of where she came from as a singer. “I was doing a song on the show called 'A Night of Serious Drinking,'” she recalls. “It's very Dean Martin, very sparse, and it tells a story. I felt really connected to my singing and the story. Whereasthe other songs, I'm caught up in all of the music and rock, rock, rock. So,I thought, 'How can I make my other songs feel like that?' And that's what Memphis Icedid.” Backed by an ace trio of Dan Chen (piano), Laura Epling (violin) and Maggie Chaffee (cello), Atkins cut the album live in one day at Memphis Magnetic studio, simultaneously filming theperformance with painterly shadow and light. The stripped-down, smoky style of both not only brings new emotional vistas to standout songs like “Domino,” “The Captain” and “Forever,” but opens the door even wider to where Atkins would like to go next as asinger. “I always thought about my Judy Garland or Liza Minnelli moment coming later in life,” she says with a laugh. “But after we finished that day of recording, I had so much fun just singing and was so in the moment, I thought, 'I want to do that sooner, I want to do that for my next record.' I want to make a record of standards that are new ifthat's possible. Songs that make you feel like you're singing 'Stardust,' but you're not. I kept thinking that on my first record, Neptune City, the songs felt old, but they were new. Why can't there be new songs that feel like the old standards?”And so, what Atkins calls “the happiest of accidents” has turned her pandemic year around with a new album, a film, an upcoming tour,and an exciting vision of a musical future that reconnects her with her beginnings. “I love rock music, but the way I really like to sing is long notes,” she says. “And you can really only do that over pianos and more orchestral-type arrangements. I can try all these different styles and put on different outfits with production. But at the end of the day, it comes back to me and my voice.” 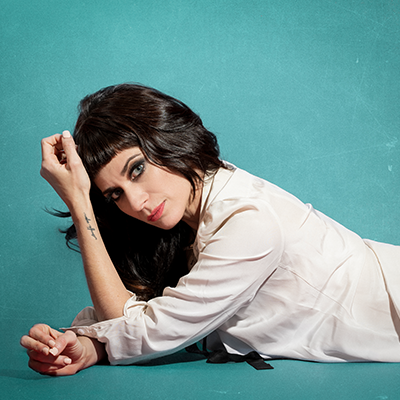