Join us for the record release party from Dizzy Box Nine!

Enemy of the People, originally from NYC is new to the LA scene. Singer, songwriter,  and guitarist, Tony Carnesi, bassist Mick Ojeda and Marc Gross on the drums round out the power trio kicking out garage punk with some blues thrown in.  EOTP has performed at the Pyramid Club, Arlenes' Grocery, Dinbgatz, Blackthorn 51 and the Delancey in the NY Metro area with bands Bloody Kisses,Tallah and Sponge to name just a few.


Next Door to Heaven

Next Door To Heaven is a progressive metalcore band which was founded in St Petersburg, Russia. Next Door To Heaven’s  debut self-released album “Let’s Dream” made it to the top-20 on Google Play. Next Door To Heaven have supported RED, TESSERACT and have toured both in Russia and abroad. In 2021 the band has started its new chapter in Los Angeles. This evening they will present their latest EP "Inside". Lord Nelson (ex - Stuck Mojo) took part in one of the tracks from this EP.

The singer song writer from Orange County, Noah Arambula moved up to Los Angeles in 2014 where he met the drummer Jaime Hernandez originally from northern New Jersey. The two began forming what would become The Manic Mile. A couple years later the two met The lead guitarist, Juan Vidales. Wishing the following couple of years the band endured a time where they where going through different musicians to meet the completion of who in the band is consisted of today. During one of their shows at their local watering hole, they met Chris Birdt a marine veteran who happen to stop by for a drink after being honorably discharged and  ultimately completed The Manic Mile. 3 years into the band’s career they have went through  performing countless shows and finding their sound. Now they successfully and independently have recorded their newly released EP “MANIC” which is officially available on all streaming platforms.
The Manic Mile is: Jaime Hernandez, Noah Aramdula, Juan Vidales, and Chris Birdt

The band was created in the summer of 2016 bysinger-guitarist Randy Ludwig, and features guitarist Tony Robles and drummerAmos Przekaza.  Dizzy Box Nine is averaginga new album release nearly every year, and they have experienced noteworthylevels of radio success.  In fact, their2020 release, Faster Than Anticipation was added to more than 100 radiostations in the US and Canada, and peaked at #176 on the college radio charts,where it remained in the top 250 for 7 straight weeks!  Their current release, Last Call Beforethe Fall, offers up 12 “interesting, surprising, and authentic” songs, andhas been called “their strongest release to date” (L.A.Music Press).

Eclecticism and simplicity help drive theDizzy Box Nine sound.  “We have beeninspired by all kinds of music, and this clearly shows in our songs,” Randysays.  Dizzy Box Nine attempts to connectwith its audience in different ways.  “Westrive to have something interesting to say, but we also want to communicatemessages through sounds as well—the sounds themselves can be very appealing.”  Perhaps L.A. Music Press says it best whenthey state, “Dizzy Box Nine has a very appealing sound, which almost catches youby surprise initially.  And then yourealize, this is not just a collection of catchy 3-chord pop songs, there’sactually an interesting level of depth, melodicism, and authenticity to thesesongs—both lyrically and musically.” Perhaps you’ll agree.

Scottish Music producer, Mr Ritzi is presenting his live show for the first time in the US. With fresh writing kicking off during the start of the Covid Pandemic he brings together a top band to present his songwriting and productions for the stage.
Starting off as bass player in Glasgow, Iain left at 21 to study voice at BIMM London where he continued to play bass in others’ projects while quietly writing in the background and developing his production skills. Along with his live band, The Show, he now presents is his entire experience of music in one space. 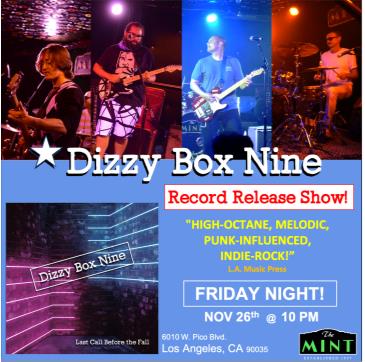 Next Door To Heaven / Dizzy Box Nine / Enemy of the People / Mr. Ritzi & The Show / The Manic Mile