Fake Blond is an LA-based indie rock duo. Blending an 80s' aesthetic with 60s' songwriting sensibilities, the band curates a fresh and tight sound. Featuring songwriter Brandon Henry and keyboardist Sean Magruder, who met by chance at a beach-side cafe in Pismo, Fake Blond aims to give a new shade to the screen of indie music.

DevElephant is a 3 peace band formed from lead guitarist Edwin's jams with multiple musicians and groups, that open door  policy has worked as a filter to bring to life darker and more meaningful songs.  The group consist of singer/guitarist Edwin Martinez,
Bass player/vox Leo Tolentino (of Sadboi) and multi-instrumentalist Steven Figueroa (The Bnds)

Verum
Verum is a space rock band from Brea, CA. The band takes sonic inspiration from alternative, prog rock, and hard rock sounds while their lyrics center on existential themes as their name--meaning “truth” in Latin--might suggest.

Their debut album Heterochromia was released in May 2021 and has already reached over 20,000 streams on Spotify. Verum is dedicated to improving themselves and their community around them by raising awareness for various causes and using their music as a force of good in their local music scene and beyond-- which is why they will be donating all streaming revenue from the album to different charities that focus on relevant human rights and social justice issues.

Verum consists of Darren Kaiser on guitar and vocals, Carson Kaiser on bass, Ashton Ventic on synth and keytar, and Eric de Masi on drums.

Black Rock Candy is a rock band from Southern California that boast an incredible eclectic sound of rock, classic rock, blues, alternative and pop with their original music. Lead singer, Taylor Jennings, will captivate you with her incredible vocal abilities, mirrored by Isabella Jennings’ colorful guitar riffs and solos. Aaron Ormond will have you on your feet with his high-energy drum ensembles. Samantha Yanis’ keyboard feel-good vibes and Dylan Gianella’s hypnotic upbeat bass sounds transcends their love for music. Their musical talent has afforded them the opportunity to perform at legendary venues, wineries, clubs, breweries, charity events and festivals throughout California and Arizona, including, the Riverside Festival of Lights, Orange County Fair, Lake Havasu WinterFest, several Temecula wineries and the Whisky A Go Go in Hollywood, CA. 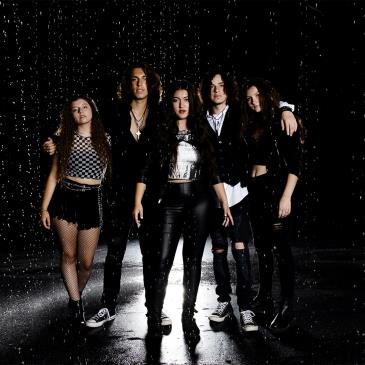