Comprised of Matt Orlando, Tom Lipski, and Bilodeau brothers John and Pat, The Warhawks are a dynamic, blue-collared indie rock outfit from Gloucester City, NJ.
Following a string of DIY releases, the band released their debut LP Never Felt So Good in January 2019, recorded and mastered at Gradwell House by Dave Downham (Beach Slang, Into It. Over It.). Combining soaring punk rock anthems of love, life and hope with a refreshing alt-rock twist, Never Felt So Good would earn them accolades as 93.3 WMMR’s “Band of the Month” that following March, as well as steady rotation of their song “Miracle” on top indie station 88.5 WXPN and live appearances on WRFF Radio 104.5. They would return to Gradwell later that year to record their follow-up EP entitled Stardust Disco. Released in February 2020, the record would go on to chart on the NACC Top 200 the first week of release.
Through their relentless efforts, the band has toured themselves throughout the northeast and midwest while cultivating a large, passionate fan base at home. They have also earned prominent opening slots for White Reaper, July Talk, The Menzingers, and Off With Their Heads among others.

Rogue!
The phrase ‘burning the midnight oil’ isn’t just an old expression. It’s a right of passage as emerging artists. After crossing paths in late night college music classes, Kasey Jaeger (Lead Vocals) and Dylan Gonzales (Guitar) bonded over a shared love for songwriting and coffee shop gigs. A duo wasn’t enough. They wanted a band and sought the help of friend Tyler Otis (Keys) in what would become the origin of Rogue!   Upon being selected to perform a 30-minute set at the local open mic spot, Kasey enlisted the help of her friends, plus David Hodrick (Drums) to perform songs they had written together. The high from that initial gig was so tremendous, they continued the magic by recording their original material. Two months later, David was hanging out with his best friend, Jesse Davidson (Bass), in the wee hours of the morning. By chance, their demo began to emanate through the car speakers. Flabbergasted by it; Jesse wanted to join that instant. From that moment on, it was so.   Since then, they have refined their sound with the release of their debut EP, Wasted Heart, in December of 2019 -- mixed by Chris Constable (Kamasi Washington, Fitz and the Tantrums, Harper Simon) and mastered by Pete Lyman (Brandi Carlile, Sturgil Simpson, Rival Sons). In 2020, Rogue! was featured on KHUG 97.5 FM in Newhall and 99.1 KBU-FM in Malibu.
Wasted Heart EP

Kent Klineman is Blind Pony's songsmith, lead singer and guitarist. He grew up in New York City where he first became involved in music and acting. He wrote his first song while hitchhiking through Greece at age 19.  After winning a Tony Award on Broadway in Death of a Salesman, Kent moved to LA in 2000.  LA brought into his life a new friend and songwriting partner: The Electric Guitar.

He met the real Blind Pony in Big Sur, and the band had a name.

Clinton Kirby, master guitar player, singer, bassist, and drummer, brings his musical prowess to The Blind Pony sound.  He plays bass and drums simultaneously at live gigs, and also sings harmony vocals. And at live shows he also switches over to play Lap Steel on "The Right Thing.”  He is a true multi-instrumentalist and consummate musician and performer.

Is it a mission or a crusade? Call it what you will, but L.A’s Unsound Foundation are determined to bring genuine excitement into what a rock band can be in post-pandemic culture.

“The world has made it easier so people don't have to be in a band,” says bassist Josh Odaffer. “You can produce your whole album yourself and make it work. But the mistakes, the oddness that comes from working with other people—the things that you're not expecting—that's where the magic really happens.”

Listeners checking into Unsound Foundation’s admirable debut, Inn For A Rude Awakening will find plenty of levels to explore. The band—bassist Odaffer, guitarist Tim Cravens and drummer Allen Kronenberger—is more spiritually aligned with the zeitgeist of ‘80s rockers who chose to express earnest commentaries and emotions without pretense. Consider “Eye For An Eye,” which feels like the Clash’s Mick Jones covering the best song the Gun Club never wrote. “Faded” is a reckless tale of people who seek friends at the bottom of a bottle. And moments like the caffeinated pogo-fest “Pounce” is the stuff that socially non-distanced, full-contact rock ‘n’ roll was made for.

“We fit into a lot of different things because we're not necessarily so straightforward,” says Odaffer. “Our influences definitely span from ‘60s to current times, and we use all of those aspects to squeeze out whatever music that we're hearing in our head. It's all rock: a whole bunch of little things, but it has that nostalgic feeling to it.”

You don’t need a sleeveless tee or black Ray Bans to represent for Unsound Foundation. You just need to rediscover the liberation one feels when faced with cranked amps and a drummer in high gear. “We want tomake thinking man's fun, rock music,” Odaffer summarizes succinctly. “We just love every aspect of being in a band. And it would be great to help get the world back to where it was—to that camaraderie, that kind of group mentality of music again.”

Hounds of Belfast is an Irish rock band playing a mix of original music, Celtic traditional tunes, and cover songs. 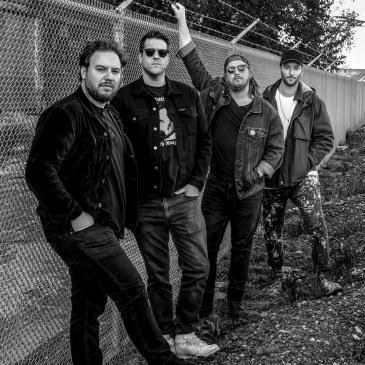