Les Nuby is returning to Saturn, and Yes Trespassing is traveling from Muscle Shoals to join in on the fun!

Beginning as the drummer in the 90s Birmingham, Alabama indie-rock power house, Verbena, Les Nuby began a steady musical exploration that’s still going. He’s a one-time touring member for Scottish legends Idlewild, touring guitarist with Amy Ray (Indigo Girls), and guitar slinger for Birmingham heroes Vulture Whale. It’s a hefty musical resume before the production credits even begin. In his Birmingham studio, Ol’ Elegante, Nuby has been the production captain for several notable releases in the past few years for artists such as St. Paul and The Broken Bones, Will Stewart, Sarah Lee Langford, and The Dirty Clergy, to name a few. He’s pretty much been there and done it all in the past couple of decades as player and producer. The only item missing from the list was a solo album. Until now.

Nuby produced, engineered and played all the instruments on Clouded, a reminiscent snapshot of when music had the ability to make you drive faster and cry harder. It may have taken him awhile to get around to making an album all for himself. But, anyone who knows the man or is familiar with his past work isn’t going to be surprised that Clouded has clearly been worth the wait.

Hailing from the legendary Muscle Shoals, AL, this four-piece rock outfit is adding new flavors to the Muscle Shoals sound and blowing minds across the Southeast. Trey Nichols (Lead Vocals, Guitar), Jonathan Mackey (Bass, Vocals), Dylan Johnson (Drums), and Emmett Redding (Guitar, Vocals), make up Yes Trespassing. The band formed in the midst of a pandemic and began arming themselves with material to share and tour with once things opened back up. Now that that is happening, Yes Trespassing is ready. Their single, Angelica, premiered on June 10th, 2021, the precursor to their debut EP, "When The Light Is Gone", which released on July 3rd, 2021. Though they are just beginning to release content, the band has already begun playing shows in various states, where crowds experience what one fan called a "wall of sound". Yes Trespassing's sound is heavily influenced by the 90's and 2000's rock movements, from alternative to grunge to even some heavier metal bands. Their songs emphasize the intertwining of instantly memorable melodies with thought-provoking lyrics that listeners easily relate to, while also providing a driving rhythm that demands head banging. The band encourages listeners to follow them on Instagram @yes_trespassing_music to get weekly updates on shows and new music. 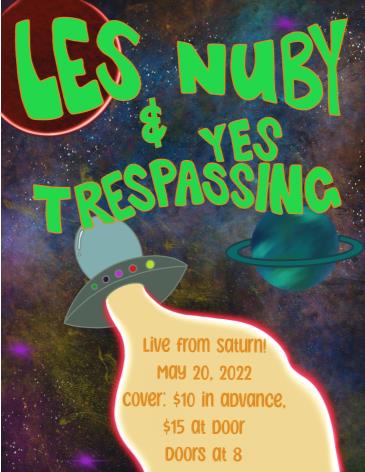