Leroy Sanchez’s whirlwind journey from his bedroom in Abechuco, a small village (pop.3300) in the rural Basque region of Spain, to global YouTube superstardom began as a whimsical lark in 2007. Curious about the video platform and inspired by others posting covers of pop songs, the talented 15 year old grabbed his acoustic guitar, turned on the webcam, and sang his soulful version of Kelly Clarkson’s “Breakaway.” The synergy between Leroy and his growing legion of fans made him an unstoppable, ever-evolving viral sensation that, over the past ten years, has resulted in over 3 million subscribers, 323 million views –including an astounding 42 million views alone for his cover of Adele’s “Hello.”

With the release of his highly anticipated independent EP Elevated, Leroy transcends the bounds of YouTube fame and emerges as a multi-faceted singer-songwriter and hit maker in his own right. Its just-dropped lead single, the infectiously seductive “Man of the Year,” is quickly capturing the hearts of millions of fans excited to hear a fresh side of the multi-talented singer-songwriter’s artistry. People magazine calls it “a soulful, lovesick bop reminiscent of Justin Timberlake and Ed Sheeran.” Pop culture taste maker Perez Hilton affectionately states, “This is such a good slow jam! And we’re a sucker for a guy who sings in his falsetto!”

“It’s a song everyone who’s been in a relationship can relate to,” says Leroy, “but on a deeper level, it’s really about my love for and connection with my fans. When I sing, ‘It ain’t about me, its all about you,’ I’m talking directly to them. I want to be the best I can be because they’ve believed in and supported me for so long.”

Growing up in a humble family in the countryside of Vitoria, Spain, Leroy remembers as a young child getting goosebumps while listening to people sing, and feeling a strong connection to music that nothing else in his world came close to. “I always sang in my room and in the shower for fun,” he says, “and then one day around the age of six or seven, one of my sister’s friends heard me and said,‘OMG, I thought that was the radio.’ My mom had a guitar that my grandpa gave her to sing along with in church when she was a kid, and she kept it like a decoration in our house. When I was about 14, my curiosity got the best of me and I began touching its strings and was mesmerized that they created such a beautiful sound. My mom gave me permission to use it and I began teaching myself guitar.”

In addition to racking up a dizzying amount of views, Leroy’s uploads attracted the attention of some major industry forces, including Grammy winning producer/songwriter Jim Jonsin, who flew the singer from Spain directly to his recording studio in Florida. Sanchez began working with numerous renowned producers and songwriters, including Rico Love, who he wrote his 2015 single “By My Side” with.

Earlier in 2017, Leroy did his first-ever headline tour throughout the U.S., Canada and Europe and was excited to see so many of the venues sold out. Later this year,reflective of his status as an international star, he will be touring in support of Elevated, with dates scheduled for the U.S., Canada, Europe, Asia and Australia. “I’m so excited about traveling to and performing in fascinating new places and bringing joy to people by sharing the full range of what I do.”

Last year, Sanchez was recognized by the Teen Choice Awards with a nomination in the “Next Big Thing” category; this year, he is up for “Choice Music Web Star.” In 2016, Leroy was also nominated in the “Cover to Cover” category by the Premios Juventud Awards, a show for Spanish speaking celebrities honoring various fields of popular culture.

“When the opportunity to do my first EP came along, I started thinking about where my career is at right now,” he says. “My fans have been so kind and gracious tome, and I feel really excited about sharing a whole other side of my artistry with them on Elevated. I’ve loved making the videos, but writing, recording and releasing a full project, of original music, is like entering a fresh new world of creative possibilities.  Another reason I called it ‘Elevated’ is that every song, even the ones that start out kind of sad, ultimately has an empowering message.” 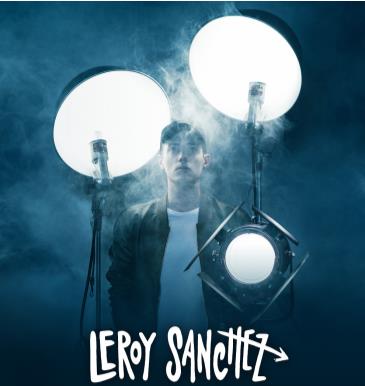