Finn Bjarnson stumbled upon Becky Jean Williams (sister to R. John Williams, the lead singer of Faded Paper Figures) in the summer of 2003. “I had just been given a local Christmas CD that I had produced a couple tracks for,” Finn recalls, “and as I was listening through the tracks, there she was! Her beautiful voice and style immediately struck me.” A couple of phone calls later and they were in the studio together for the first time. “I had worked up this song called ‘Empty Streets’ and wanted to try her voice out on it...” Finn continues, “and it took off from there!”

Finn had already been working in the studio with Ryan Raddon (aka Kaskade), and soon Finn, Ryan, and Becky formed Late Night Alumni. In 2004, Hed Kandi made an offer to license and release a full length Late Night Alumni album. “At that point,” Finn says, “I knew the band was not ready. We were missing an element.” That missing element turned out to be John Hancock, a talented local producer with whom Finn had been trying to “find an excuse” to work for years. The band was complete and hard at work at the debut Late Night Alumni album; mixing electronic and organic elements for a unique brand of chill that is easily distinguishable in today’s down tempo house music scene. 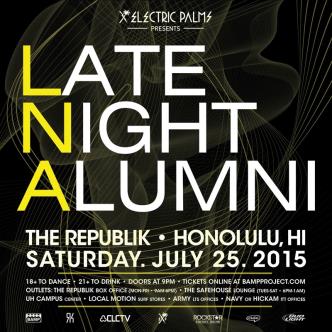