Rather than pander to the purists or create music for DJs alone, Daniel Goldstein aka Lane 8 has always tread his own, distinctive path -- perhaps best summed up by his phones-free event and label concept This Never Happened.

The concept is a simple one: remove all phones and cameras from the event, get back to connecting with the music and the people around you. And it is one that has been embraced with passion by Lane 8's dedicated fanbase and the dance community at large. With his most recent This Never Happened tours including sold-out shows at Warsaw in New York, The Fonda in LA, and Zoo Project in Sydney, the This Never Happened message is being spread far and wide.

In tandem with the events, Daniel's output on the TNH label has stood out for its integrity and artistry whether on emotional epics like "Fingerprint" or quirky upbeat groovers such as "With Me." Always defined by a melodic touch, TNH is the culmination of a steady, assured rise over recent years.

After blowing up in the blogosphere with a series of Soundcloud-driven Hype Machine #1s around 2014, Lane 8 rose to wider prominence through a relationship with the tastemaking Anjunadeep label and his critically acclaimed 2015 album "Rise."

Returning to the label with the Kidnap Kid collaboration "Aba," 2017 will also see a steady stream of music on This Never Happened and more TNH tours the world over.

Alongside his own productions, his remixes have almost become as sought after as his originals with reworks of Maribou State's Wallflower and ODESZA's "Bloom." More recently he has given RUFUS's leftfield pop gem "Innerbloom" and Deadmau5's iconic "Strobe" his own unique touch. 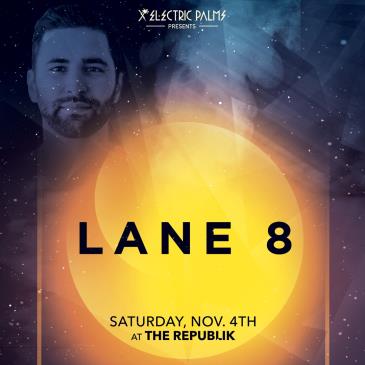