Born in the Philippines and raised in Holland, Laidback Luke, aka Luke van Scheppingen, grew up in a musical household, learning guitar and immersing himself in hip-hop and graffiti culture at a young age. After a chance encounter with Dutch DJ Dobre -- who had been booked to play at a high school party -- Scheppingen realized that he had a connection with the vibe and energy of dance music. Utilizing a basic production setup, he set about creating his own tracks and sent a demo to Dobre. Realizing his potential, Dobre helped to champion the young producer, with Scheppingen releasing his first 12", Loud Flava, Vol. 1, in 1995. Following up with Vol. 2 a few months later, he then turned heads with his Act the Fool 12" on Dobre's label Touché. His infectious blend of house and techno soon caught the ears of the music press, and with numerous releases throughout 1996, a remix of Green Velvet's The Stalker (which was picked up by leading DJ Carl Cox), and the start of a professional DJ career, Laidback Luke had become an instantly recognizable name in the techno and house scenes. With his production work picking up pace, Scheppingen continued to DJ to sold-out crowds through to the end of the '90s, and in 2000, he released his first major-label single, Rocking with the Best, after he signed a deal with Virgin Records. Following up with Spacefunk and Popmusic, both taken from his 2002 debut album, Electronic Satisfaction, Scheppingen's style shifted to a more electro-house sound, and saw him remixing numerous high-profile artists including Daft Punk.

In 2003, he met Swedish DJ and producer Steve Angello after striking up a friendship via his own website's forum. While continuing to forge their own paths in the ever-evolving dance music scene, the pair finally collaborated in 2006 with the release of Otherwize Then. As the Swedish house sound filled the charts, Scheppingen joined forces with Angello, Sebastian Ingrosso, and Axwell for the huge 2007 hit Get Dumb. With Angello and company firm favorites at super-clubs around the world, Scheppingen's profile rose once again, with his name being linked to the world-famous Swedish House Mafia. As the electronic dance scene in America grew at the end of the noughties, the mix of electro-house, dubstep, and trance that had taken hold of Europe a few years earlier exploded as EDM. Collaborations with the likes of EDM mainstay Steve Aoki, dubstep and hip-hop producer Diplo, and U.K. chart-topper Example in 2011 firmly put the Laidback Luke name on the map. Although Scheppingen's own releases slowed after 2011, his remix work continued, seeing him rework some of pop music's biggest stars, including Madonna, Depeche Mode, Robin Thicke, and Tiësto. His long-awaited sophomore release materialized in 2015 when Focus was released with contributions from Yellow Claw, Benny Benassi, and others. ~ Rich Wilson, Rovi 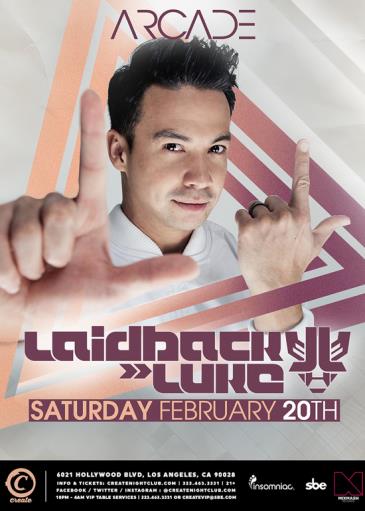