During the making of her first album for Capitol Records in 1971, she attended a music concert at the Troubadour, and heard a young Don McLean perform his song, “Empty Chairs”. It made such an impact on her, that she wrote a poem right then and there on a napkin, which became the now classic song, “Killing Me Softly”. Her recording was featured on an American Airlines flight where Roberta Flack heard it on headphones, loved it and released it soon after. The song went on to win Grammys for Best Record, 1973.

Throughout the seventies, Lieberman toured with Leonard Cohen, Randy Newman, and Billy Joel, to name a few. Over the course of the next several decades, in addition to recording and releasing 19 albums, Lieberman raised a family, while maintaining a solid fanbase in both the US and Europe. Most recently, she performed at Carnegie Hall for the second time, bringing with her the renowned string ensemble from the Netherlands, The Matangi Quartet, who is featured on her most recent album, “The Girl and the Cat”.

The return to the Troubadour holds a deep significance to Lori Lieberman, where it all began. The evening, a seated event, will feature Lori on piano and guitar, accompanied by accompanied by the noted Fiato String Quartet, performing songs from her newest LP as well as her lengthy catalogue. 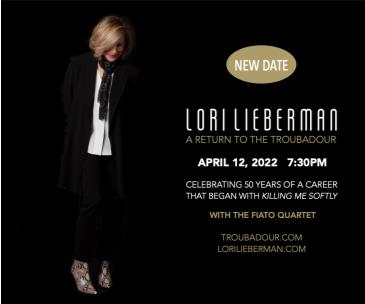 Show Map
View 9081 N. Santa Monica Blvd in a larger map
We use cookies to provide you with the best experience possible. By using See Tickets, you accept our cookie policy.
Accept
ftr1:0