A twenty year anniversary is cause for celebration, and Lonestar is marking this career milestone in more ways than one. Reunited with original lead singer Richie McDonald, the multi-platinum country music quartet is working hard on a brand new album and embarking on an extensive anniversary tour, with over 90 dates scheduled in North America alone.

"Twenty years ago, when we put this little band together to play in some bars and make a little money, I dreamed it pretty good," admits keyboard player and songwriter Dean Sams. "But I never dreamed it quite this good."

Known for merging their country roots with strong melodies and rich vocals, Lonestar has amassed RIAA-certified sales in excess of ten million album units since their national launch in 1995 and achieved ten #1 country hits including "No News," "Come Crying To Me," and their crossover smash "Amazed" (which was also #1 on the Billboard Hot 100, the first record since 1983's "Islands in the Stream" to top both charts). The band's awards include a 1999 ACM Single of The Year for “Amazed” (the song also won the Song of the Year award) and the 2001 CMA Vocal Group of the Year. 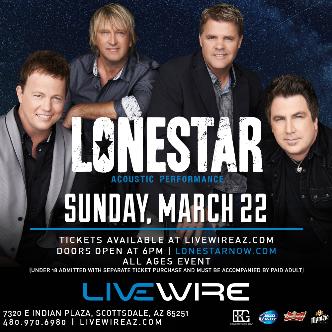