Who is LANCO? LANCO is the people you know and the life you live, reimagined.  LANCO is the familiar, couched in the extraordinary. LANCO is a connection to a community built by the bonds of music.  They are five best friends making music and working to create something bigger while grinding it out on the road to build an identity.  Through this, they became Lancaster & Company, now known as LANco.  Everyone touched by their music becomes part of the Company.  The band is nothing without the Company.  The musical mission statement: every day in every way, throw one hell of a Company party.

Formed in 2012, LANCO was born of a chance meeting between Howell and Nashville native Lancaster – each performing in bands at the same festival – just as Howell was readying a move to Music City the same week that Lancaster was returning from college. Once in Nashville, Lancaster met Steedly through mutual friends, while Hampton and Baldwin followed shortly thereafter, with the young band gigging at every opportunity.

Mining a catalog of songs written by Lancaster, the group began to develop its sound. Making the most of Howell’s day job in a carpet warehouse, the guys would slip in at night to rehearse on the little-traveled second level, loading their gear up and down with a forklift until they realized they could safely hide it with carpet between rehearsals.

But it was Lancaster’s side job – working a concession stand at Nashville’s Bridgestone Arena – that opened a big door for the band when he spotted producer Jay Joyce at a concert in 2014. A fan of Joyce’s work as producer of such acts as Little Big Town and Eric Church, Lancaster recalls with a smile, “I closed down my hot dog stand and walked up to Jay and just introduced myself.”

The conversation brought an invitation from Joyce for Lancaster to share some songs that he’d written, and shortly thereafter, for a band audition.

“One week we’re playing in a carpet warehouse, and a few weeks later, we’re playing live in Jay Joyce’s studio,” marvels Lancaster, “and he’s like, ‘Okay, we’ve gotta make a record; let’s do this.’”

The first result of their collaboration is LANco’s four-song self-titled EP. Featured tracks include the lead single, “Long Live Tonight,” as well as “We Do,” “American Love Story” and “Trouble Maker.” The EP offers first-time LANco listeners a taste of the distinctive style that defines the band’s music, from production to songwriting. Download the LANco EP here and stream it on Spotify here.

“It’s country music in a way that hasn’t been done before,” Lancaster observes. “No other band that’s out right now has the production and the dynamics of the music that I think that we have in ours.”

Carrying forward one of the core traditions of great country music, Lancaster adds that you’ll find “aspects of classic country songwriting within the music; we have stories being told.” But even in its storytelling, LANCO is carving a lyrical niche, with writing designed to offer “unique perspectives of very universal situations.”

Now looking forward to the release of their upcoming full-length debut album – also produced by Joyce – LANCO is among the first acts signed to Sony Music Nashville since the arrival of new Chairman & CEO Randy Goodman. Assigned to the label group’s Arista Nashville imprint (home to Brad Paisley, Carrie Underwood, and more), the band was an immediate win with Goodman, who offered them a deal on the spot the first time he heard them live.

Indeed, the band’s live performance energy is becoming one of their undeniable calling cards – and a big part of that is being able to engage the audience.

“I want people to not just hear the music, but be a part of the music. All the songs that we’re playing and singing, they’re really talking about people’s lives, and they’re talking about situations that every person’s familiar with, and we’re doing it with a lot of energy and a lot of crowd participation. I always go out in the crowd and sing, and we’re very interactive.

"We are LANCO and so are you." 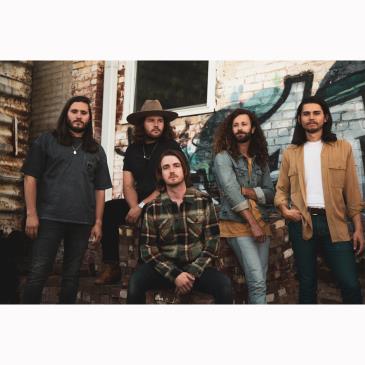