Tickets will be available at the door.

TOWN’S DEAD, by Kojaque
the dérive: a mode of experimental behaviour linked to the conditions of urban society; a technique of rapid passage through varied ambiances.
What are you running from? From the politics? From the ex’s ex? From grief? From expectations? From the temptations of recklessness? Or from bad choices and all those conflicting voices? Well, Town’s Dead, but it’s still New Year’s Eve, and as the evening descends, the countdown is on. Will we make it to midnight? Because Betty’s fella’s got a gun…
Kojaque follows his critically acclaimed cult concept record, Deli Daydreams, with an expansive, urgent debut album that speeds headlong into love, sex, violence, drug deals gone wrong, depression, and the claustrophobia of a hometown. In this landmark debut, Kojaque mines both his emotional interior as an artist, and the external forces of a love triangle barrelling towards chaos. Welcome to a city full of fuck ups and let downs, where nobody’s seen nothing if they ask you.
Emerging in 2015 with a video performance piece for Midnight Flower, a literally breath-taking performance piece taking place under water, Kojaque co-founded Soft Boy Records with Kean Kavanagh. Soft Boy quickly became a hub for experimental hip-hop, jazz, and the indiscernible genres that emerge when artists with vision find their voices.
Deli Daydreams arrived in 2018, ostensibly a concept album orientating around a week in the life of a deli worker, and loaded with heartbreak, tenderness, side-angle views at masculinity, and loneliness. The project was nominated for the Choice Music Prize, the prestigious album of the year award for music from Ireland. Green Diesel (2019), a collaboration with Luka Palm, followed.
Soft Boy became the subject of a Boiler Room documentary, Mercury Prize-nominated UK rapper slowthai chose Kojaque to accompany him on his sold out European tour to promote his album Nothing Great About Britain, and festival appearances exploded at Glastonbury, SXSW, Pitchfork Music Festival Paris, alongside multiple UK and Irish tours.
Kojaque’s directorial vision continues to create incredible videos for his tracks, vignettes that explore intimacy, isolation, hedonism, and offer a brilliantly surreal immersion into the Soft Boy world. In 2020, Kojaque performed a COLORS show with the track Shmelly, the first single from Town’s Dead, and his first release since 2019’s Flu Shot.

Town’s Dead is a mind-bending, explosive and expansive trip, documenting a tumultuous love triangle that unfolds across New Year’s Eve in a place where gentrification poses as much a threat as the violence of street dealers. Sonically, the record smashes any previous expectations, stretching an aural palate that leaps from rage to solace, from clattering musical combustions to tender ruminations. The tremendous scope and scale of Town’s Dead demonstrates an artist utterly untethered to assumptions about what a particular voice or genre should be, and instead explores radical musical territory. Dark corners of parks, bedrooms, clubs, streets, and psyches are excavated, and pouring over the rubble is an artist who refuses to conform, unafraid of the vulnerabilities that are exposed when the voice rings true, because there’s just no point in being anything else.
Through breakups and breakdowns, Town’s Dead teeters on the brink, spilling from the mind of a singular artist, onto streets populated by broken hearts and scaffolded by a broken system. This is a siren, traversing the stoned fuzz of isolation, the whiplash of complicated relationships, the frustrations and euphoria of love, the mundanity of monotony, the demented gaslighting of gentrification, and the hope that can still emerge from the burned-out beauty of it all.
In an album liberated from the constraints of genre, the title track rages against the social cleansing of working class neighbourhoods. Sex N Drugs pairs the ennui of a late night piano lounge with an even later night lonely spliff-lighting spooning session. Curtains is an epic within an epic, an internal musical and lyrical dialogue powered by a locomotive engine bursting towards the light at the end of the tunnel.
Kojaque is part of a new wave of Irish artists flooding the world with blistering and sophisticated literature, film and music - ideas and work that emerged from a social revolution stonewalled by late-stage capitalism. Welcome to that state of mind, where the path less travelled is the only one worth taking.

Cofounder, producer and A&R of Irish Label Soft Boy Records, Kean had previously pulled the strings behind the scenes; but is now becoming one of the most exciting names on the emerging music scene. A story-teller, word-smith and dexterous musician with a strong imagination, Kean’s career is set to project far beyond his Irish roots… with credits across  Soft Boy Records co-founder Kojaque’s ‘Town’s Dead’ album and also recently playing on stage with Kojaque at All Points East festival.

Founded in 2015, Soft Boy Records morphed into a cultural behemoth that gripped the Irish music scene and has refused to let go. Kean found himself sharing stages with big names such asSlowthai and Lana Del Ray, as well as his consequential solo-slots opening for Maverick Sabreand Vampire Weekend.

Last year, Kean appeared on the Everything is Recorded project ‘FRIDAY FOREVER’, (curated by Richard Russell of XL Recordings) alongside Aitch, Flohio, Maria Somerville, Ghostface Killah and others, and aligning himself with a tastemaker and hot tipped selection of musical peers. 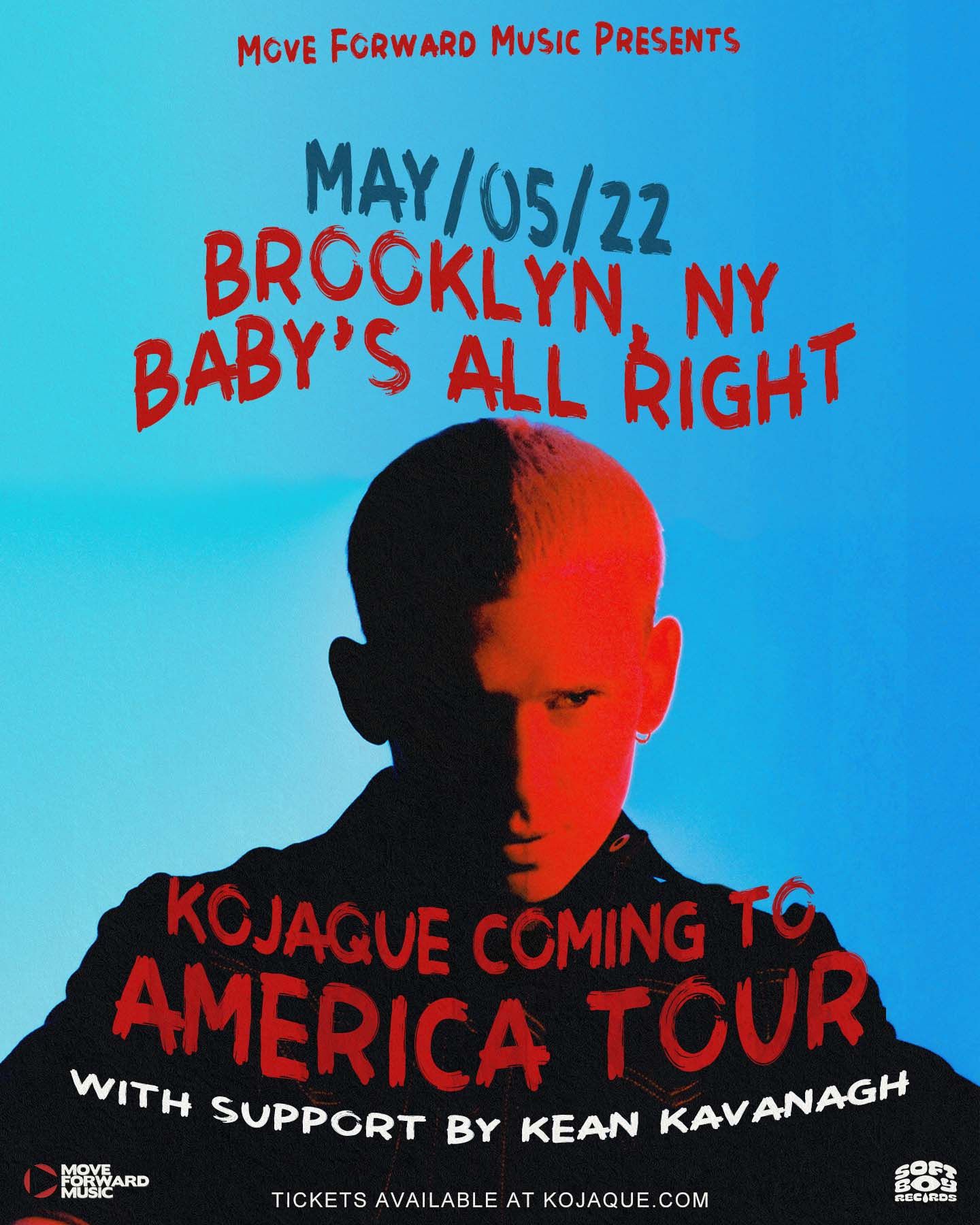